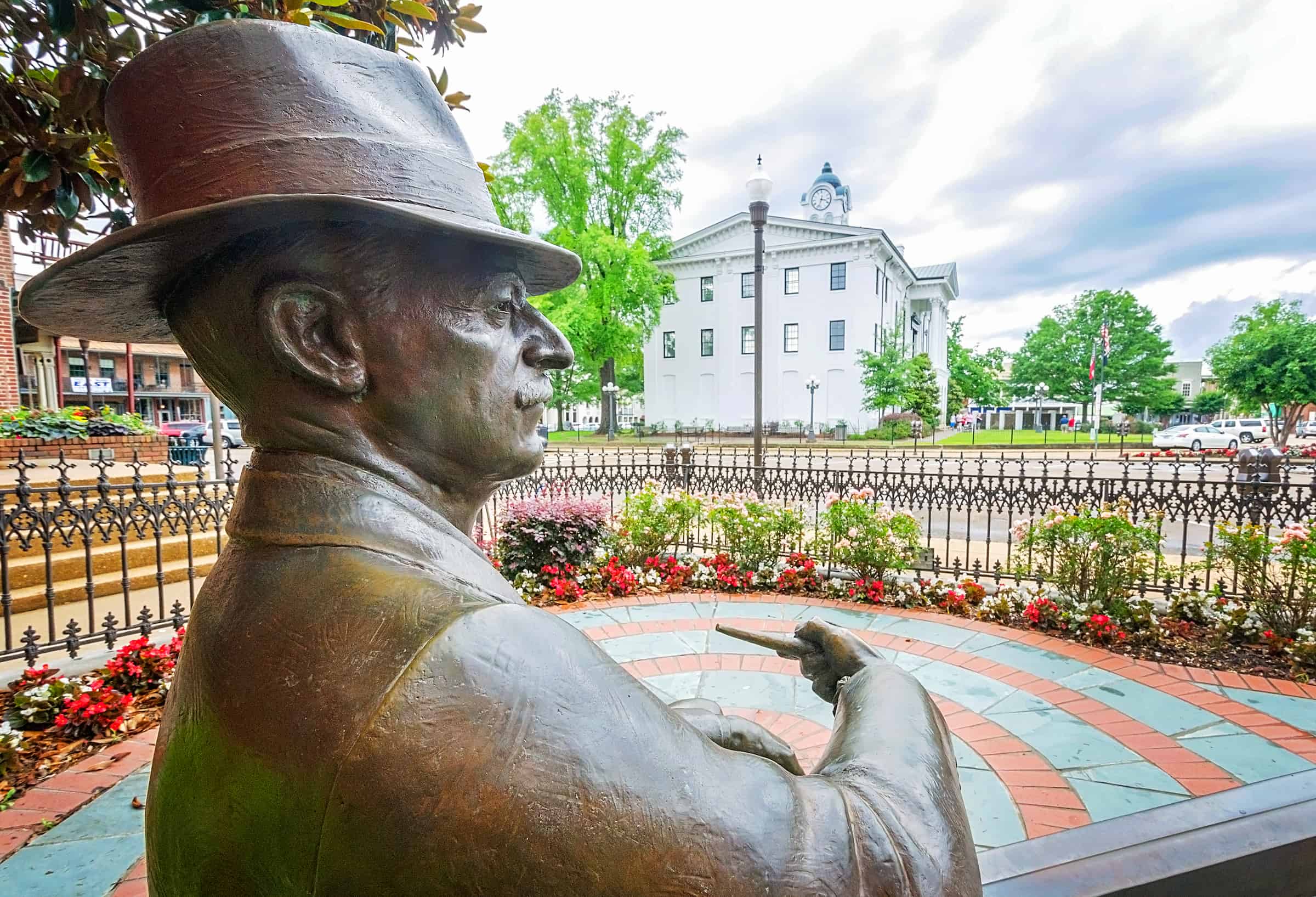 A bronze statue of William Faulkner looks out over Courthouse Square, May 31, 2015, in Oxford, Mississippi. In the background is the Lafayette County Courthouse, which played a frequent role in his novels. (Photo by Carmen K. Sisson/Cloudybright)

The smell of rain is in the air, and for now, they’ve fled “the center of the universe,” as the town is called, leaving the Square to a shopkeeper’s tabby and tourists ignoring lightning to photograph themselves with William Faulkner’s bronze effigy. 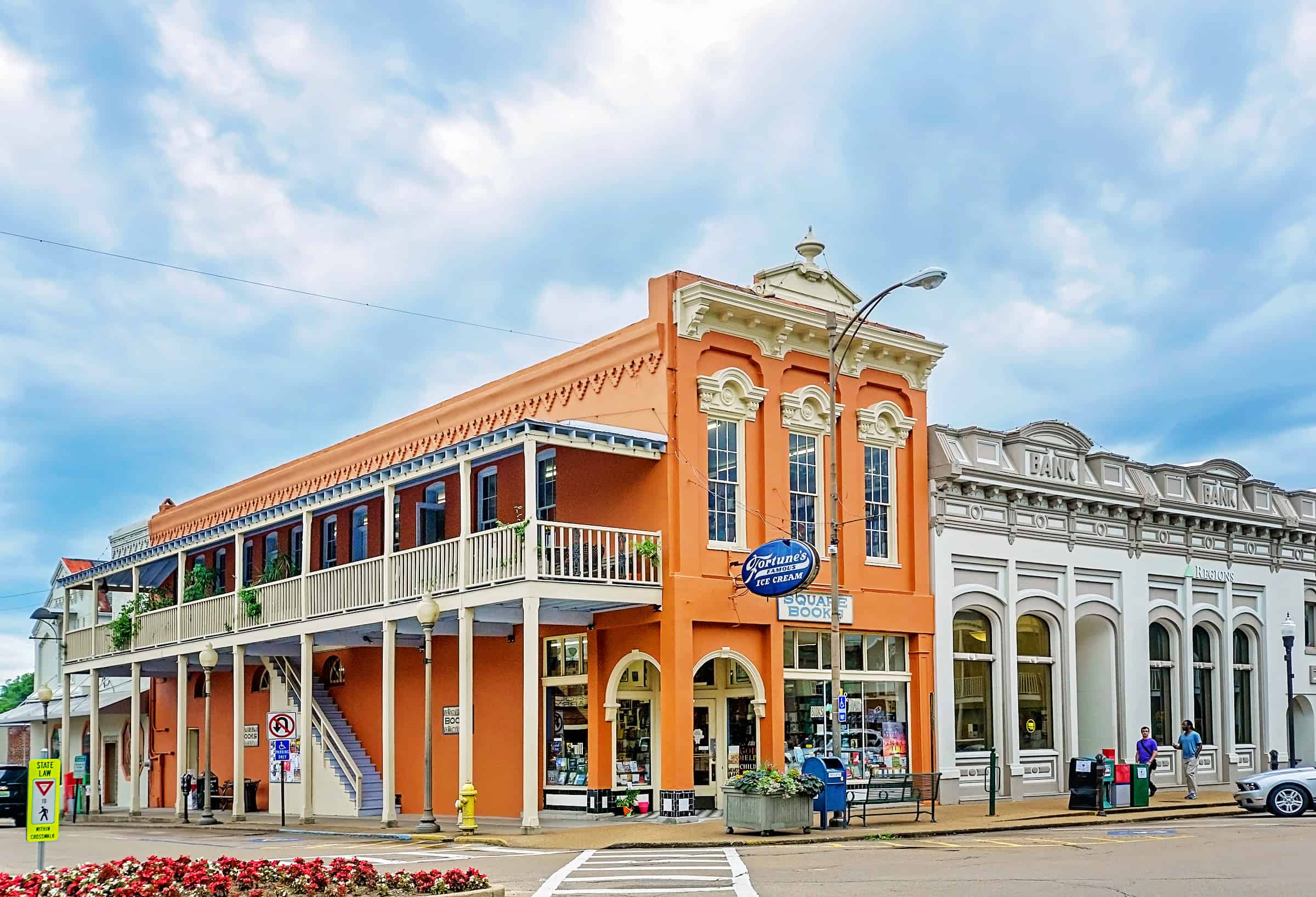 Cloudy skies gather above Square Books, May 31, 2015, in Oxford, Mississippi. The family-owned bookstore was founded in 1979 by Richard and Lisa Howorth and is considered to be one of the catalysts prompting downtown revitalization in Courthouse Square. (Photo by Carmen K. Sisson/Cloudybright)

At Square Books, between racks of Moleskine notebooks and stationery, owner Richard Howorth holds court with a conclave of business leaders. From here sprang forth the ideas that shaped the soul of Oxford today — and the seeds of a legend. 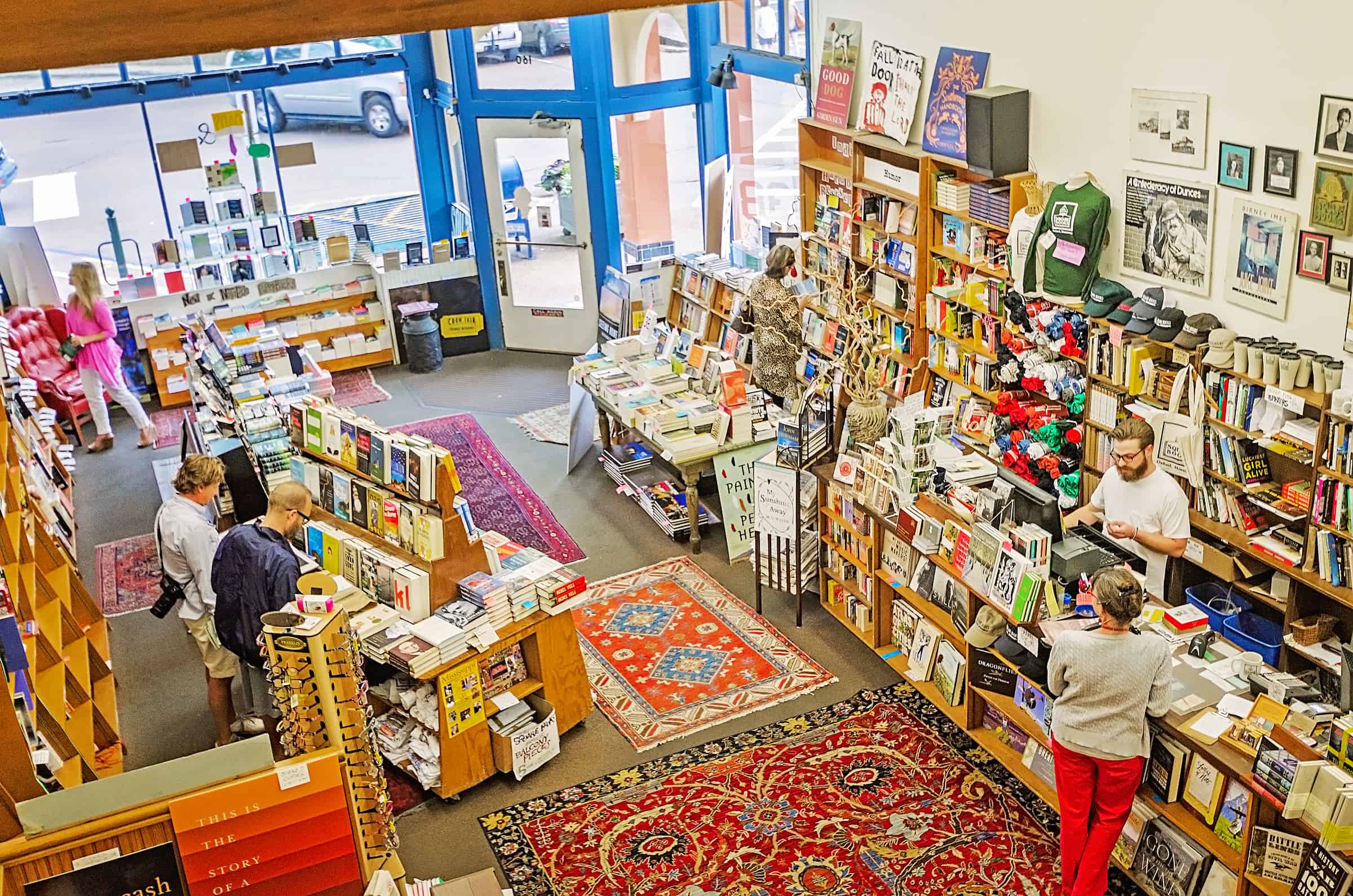 Customers browse the book selections at Square Books, May 31, 2015, in Oxford, Mississippi. The family-owned bookstore was founded in 1979 by Richard and Lisa Howorth and is considered to be one of the catalysts prompting downtown revitalization in Courthouse Square. (Photo by Carmen K. Sisson/Cloudybright)

Howorth, who served as mayor from 2001 to 2009, rolls his eyes at the legend part. He remembers when the Square was filled with grocery stores and pharmacies, lawyers’ offices and dry cleaners. It was not a destination; it was just another postage stamp of soil. Quiet. Unassuming. Just another country town.

In some ways, the Oxford Howorth remembers still exists.

There are no flashing signs leading to the mansion where Faulkner drank and rode horses and drank some more while penning words that explored the Southern consciousness. Only a plaque points to his grave. The family and the town fought for this understated elegance, knowing it would become a mecca but ensuring it would never be literary Graceland.

In some ways, the Oxford Howorth remembers exists only in the minds of those who lived here before the 1980s. Before strip malls forced the town to reinvent itself. Before economic development and historic preservation began their awkward tango. Before bars, restaurants, upscale boutiques, and luxury condominiums reshaped downtown.

Post-Watergate and mid-Ford, the only place you could buy beer was at The Gin. A decade ago, a tourist asked where he could buy espresso and no one knew. Now beer — and espresso — flow as easily as the Yocona River on a summer day.

Downtown survived the big-box explosion, thanks to a supportive constituency and merchants like Howorth who knew when to fight and when to bend.

“They call this progress,” Faulkner wrote in 1947. “But they don’t say where it’s going; also there are some of us who would like the chance to say whether or not we want the ride.”

But merchants knew that as the South’s agrarian economy withered on the vine, downtown’s survival would require creativity, flexibility, and a dash of derring-do. They said yes to beer and espresso; they fought bitterly over condominiums and Walmart. 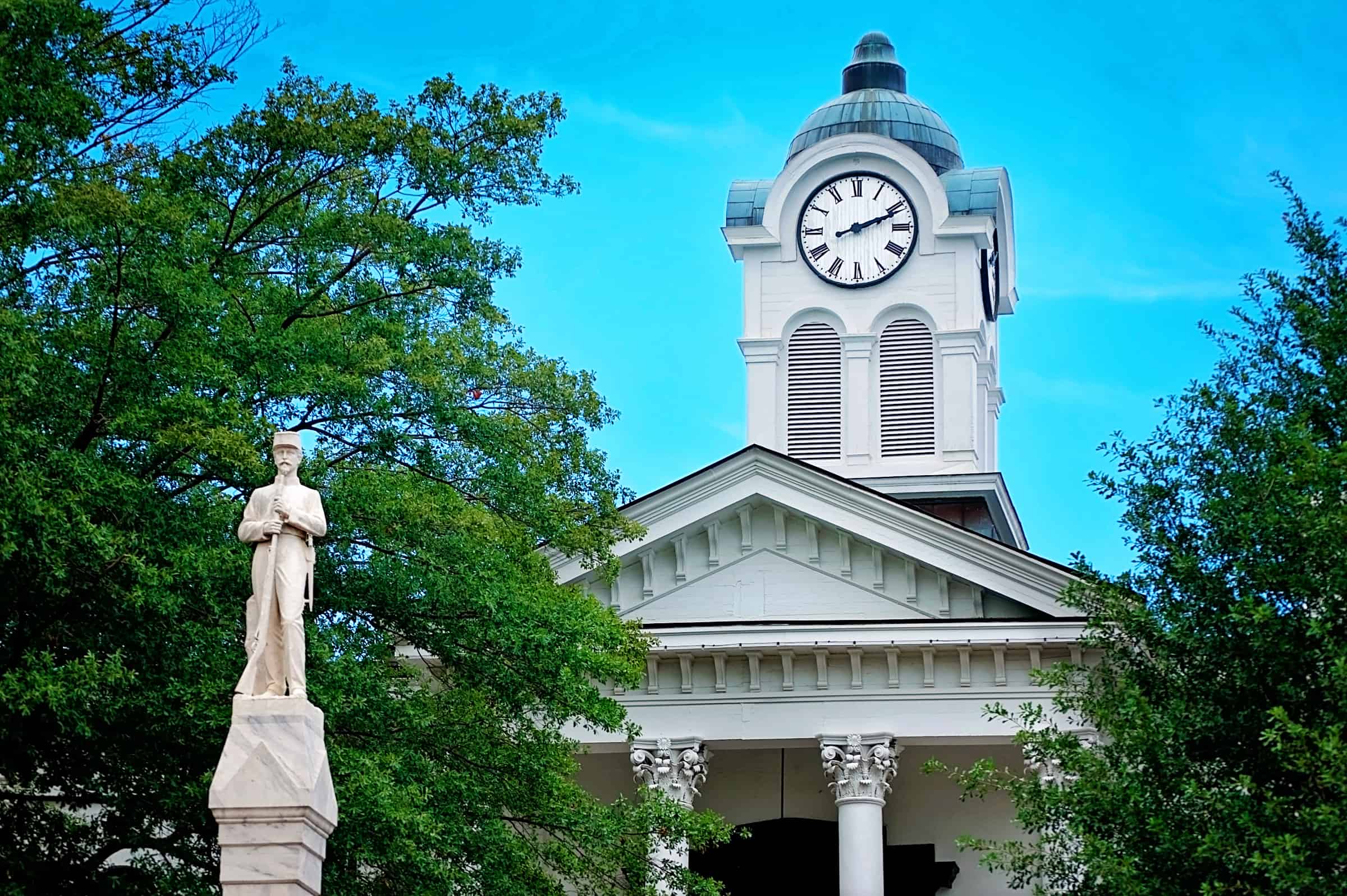 When the first mall arrived in 1983, they joined forces and employed cooperative advertising and promotional programs to spotlight their uniqueness. They strung white lights from the trees, dragged their wares to the sidewalks, and made downtown an experience.

There are two sides to Oxford, and to appreciate either, you should sample both. 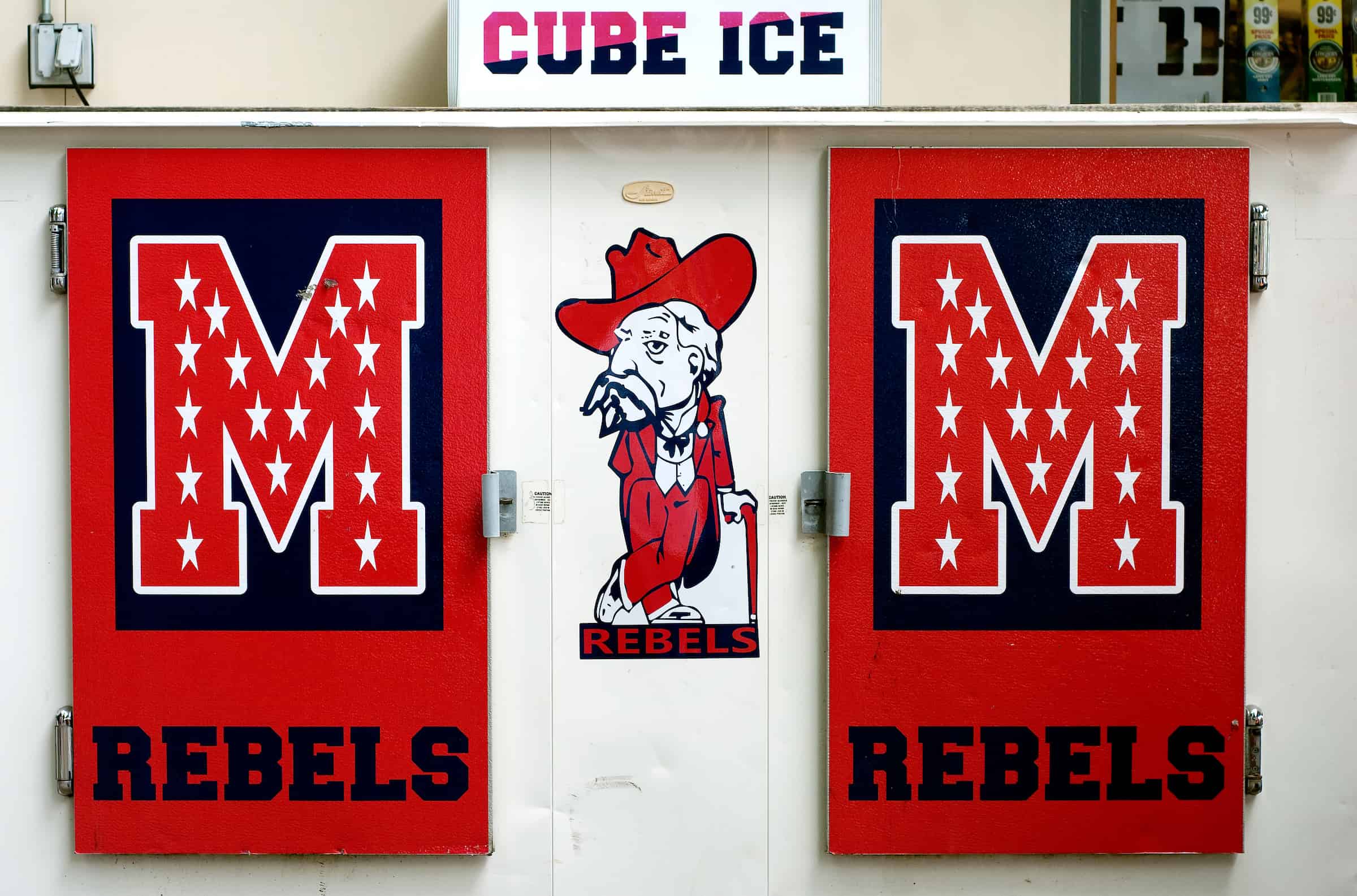 An outdoor ice machine bears logos from the University of Mississippi, including the university’s mascot, Colonel Reb, the “M” with stars, and the rebels nickname, July 17, 2011, in Oxford, Mississippi. (Photo by Carmen K. Sisson/Cloudybright)

Some say life begins and ends with the University of Mississippi, and most roads will lead you there eventually. If it’s your first visit, avoid game day weekend unless you love football or have a keen sense of adventure, in which case, bring a white linen tablecloth and your best duds, snag a candelabra at Mustard Seed Antique Emporium, and tailgate with Rebels fans in The Grove.

Stop at Chevron and buy the crazily popular “chicken-on-a-stick.” Hand-dipped, double-battered, and nearly a foot long, it’s outlandishly ordinary but tasty. Employee Corey Brasfield says on average, he sells 150 a night. During the Ole Miss-Auburn game, he sells more than 700.

Take your treat to The Grove and eat beneath the canopy of trees, then wander to The Lyceum, which was a hospital for Union and Confederate troops during the Civil War. See that hole in the upper left of the double doors? It’s a bullet hole, inflicted on a chilly September night in 1962 when the campus exploded into violence as James Meredith became the college’s first African-American student. 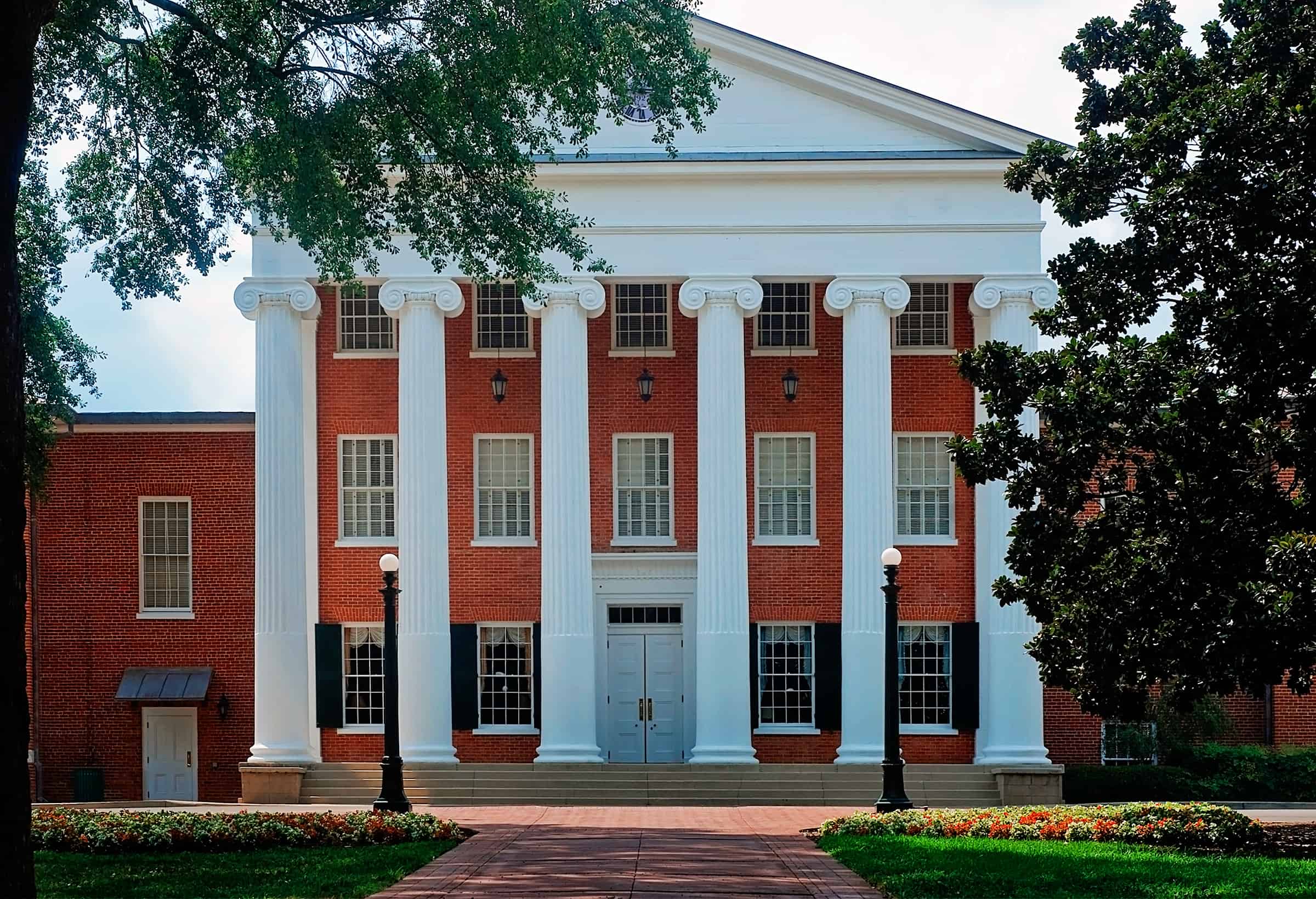 The Lyceum is pictured on the University of Mississippi campus, Aug. 6, 2011, in Oxford, Mississippi. The 1848 Greek Revival building was the site of riots in 1962 following the enrollment of James Meredith, the first black student on campus. It was used as a hospital during the Civil War and currently serves as the university’s administration building. (Photo by Carmen K. Sisson/Cloudybright)

Visit Barnard Observatory and explore the Center for the Study of Southern Culture. From barbecue to the blues, from river baptisms to Freedom Riders, if it’s Southern, someone is studying it. This is the home of the Southern Foodways Alliance, which folds oral history and documentary into a veritable gumbo they call “culinary tourism.” This is also home to frequent lectures, readings, and special events.

Check out the expansive blues archive at the J.D. Williams Library, which also houses Faulkner’s 1949 Nobel Prize. Visit the University Museum to see Greek and Roman art, 1840s scientific instruments, and hair from the tail of Robert E. Lee’s horse. (Ma ‘Cille’s Museum of Miscellanea fans may scoff, but the Mary Buie wing has a number of oddities, including tiny fleas dressed in beach apparel.)

Catch a show at the Gertrude Castellow Ford Center for the Performing Arts. At six stories high, with 88,000 square feet, it gives the chance to see world-class musical and theatrical productions on a scale rivaling large cities.

When you finish soaking up the culture, soak up barbecue at The Rib Cage. They have other items besides ribs, like kielbasa quesadillas and quail, but really, get the ribs.

Or consider having catfish at Ajax Diner. It’s Southern soul food, the likes of which you find elsewhere unless you sneak in your grandma’s back door. The catfish is thick and spicy, and the sweet potato casserole, dotted with pecans and drizzled with melted marshmallows, will haunt your dreams. You won’t be Instagramming your food though — it’s way too dark inside.

When you’re finished, wander over to Proud Larry’s. They serve food as well, but the main attraction is the music. Whether you like local bands or newcomers to the scene, you’ll find them here. 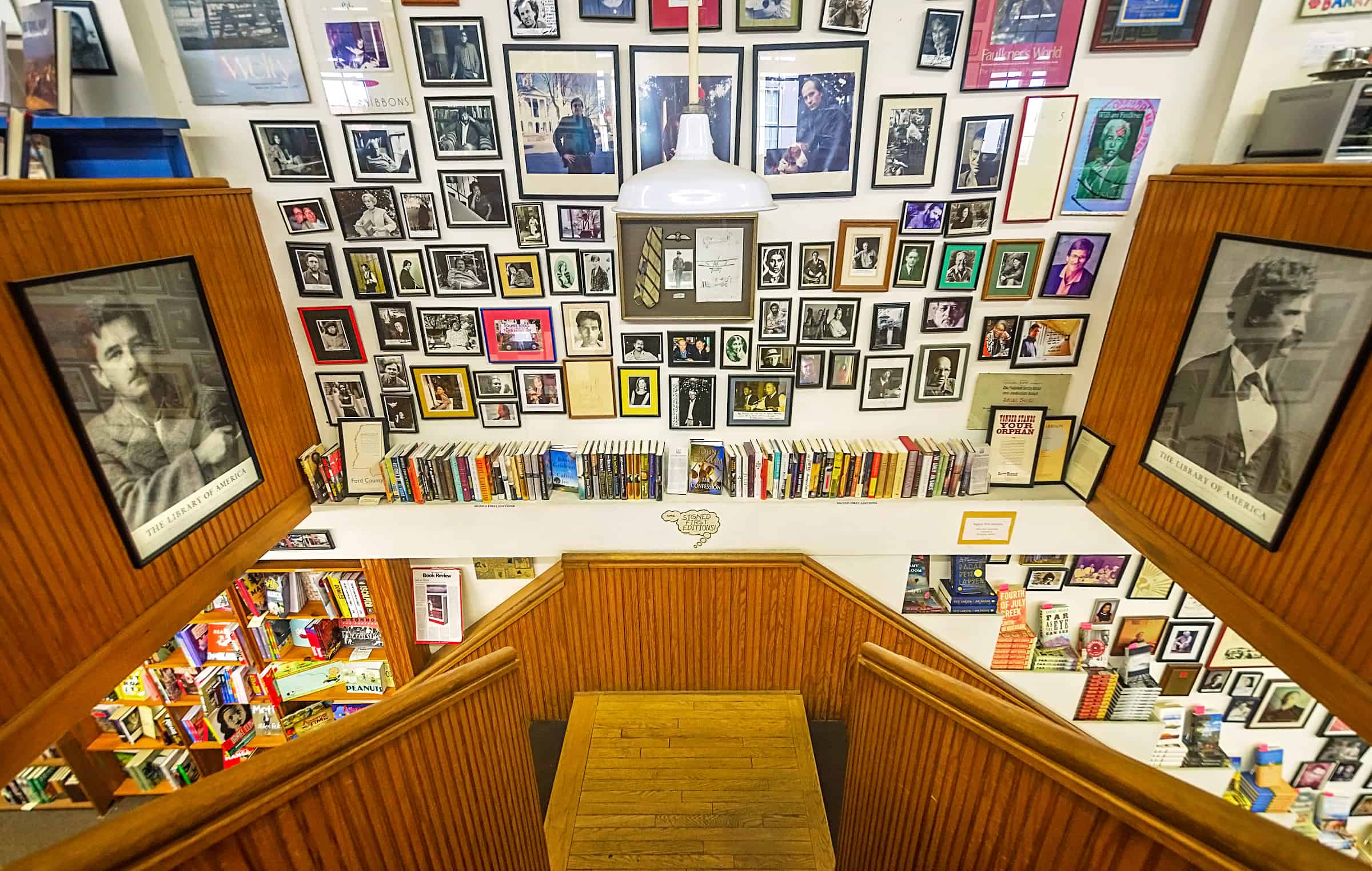 Photographs of authors and author signings fill the walls at Square Books, May 30, 2015, in Oxford, Mississippi. To the left is William Faulkner, and to the right is Mark Twain. The family-owned bookstore was founded in 1979 by Richard and Lisa Howorth and is considered to be one of the catalysts prompting downtown revitalization in Courthouse Square. (Photo by Carmen K. Sisson/Cloudybright)

You’ll want to spend most of Saturday on the Square.

If you love literature, go ahead and have your mail forwarded to Square Books, because once you cross the threshold, you’ll find your forever home. The balcony is popular for people-watching, coffee-sipping, intelligent discourse, and light banter. 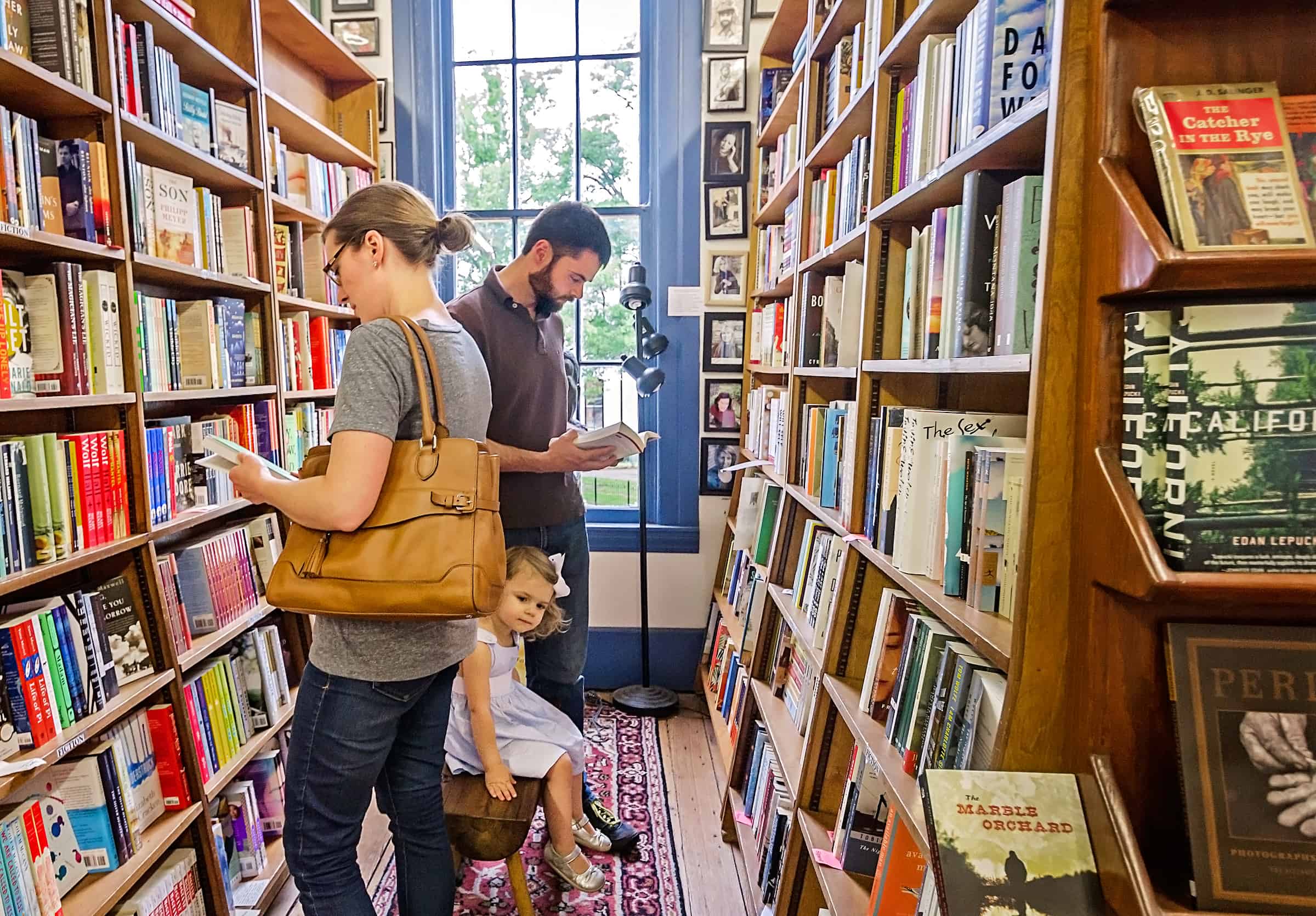 Hannah Rigby and J.R. Rigby check out the latest fiction as their daughter, Sarah Gwen Rigby, patiently waits on the bench between them at Square Books, May 31, 2015, in Oxford, Mississippi. The couple said they enjoy Southern literature. Ms. Rigby is a fan of Eudora Welty’s short story, “Why I Live at the P.O.,” and Mr. Rigby likes William Faulkner’s “Go Down, Moses.” (Photo by Carmen K. Sisson/Cloudybright)

Visit Nielsen’s, circa 1832, which claims, “We may be the South’s oldest store, but we’re not old-fashioned.”

Hold on to your wallet at Stash, which features drool-worthy furniture at jaw-dropping prices.

Items from Peter’s Pottery are displayed at Mississippi Madness, a boutique gift shop on Courthouse Square in Oxford, Mississippi. The store sells merchandise made by Mississippi artisans. (Photo by Carmen K. Sisson/Cloudybright)

For a light lunch, try laidback Soulshine Pizza Factory. The cream of crawfish soup is more addictive than the menu claims, and the Bob Marley pizza, featuring Jamaican jerk seasoning, smoked pulled chicken, grilled chicken, mozzarella, and sun-dried tomatoes, is excellent if you like heat. 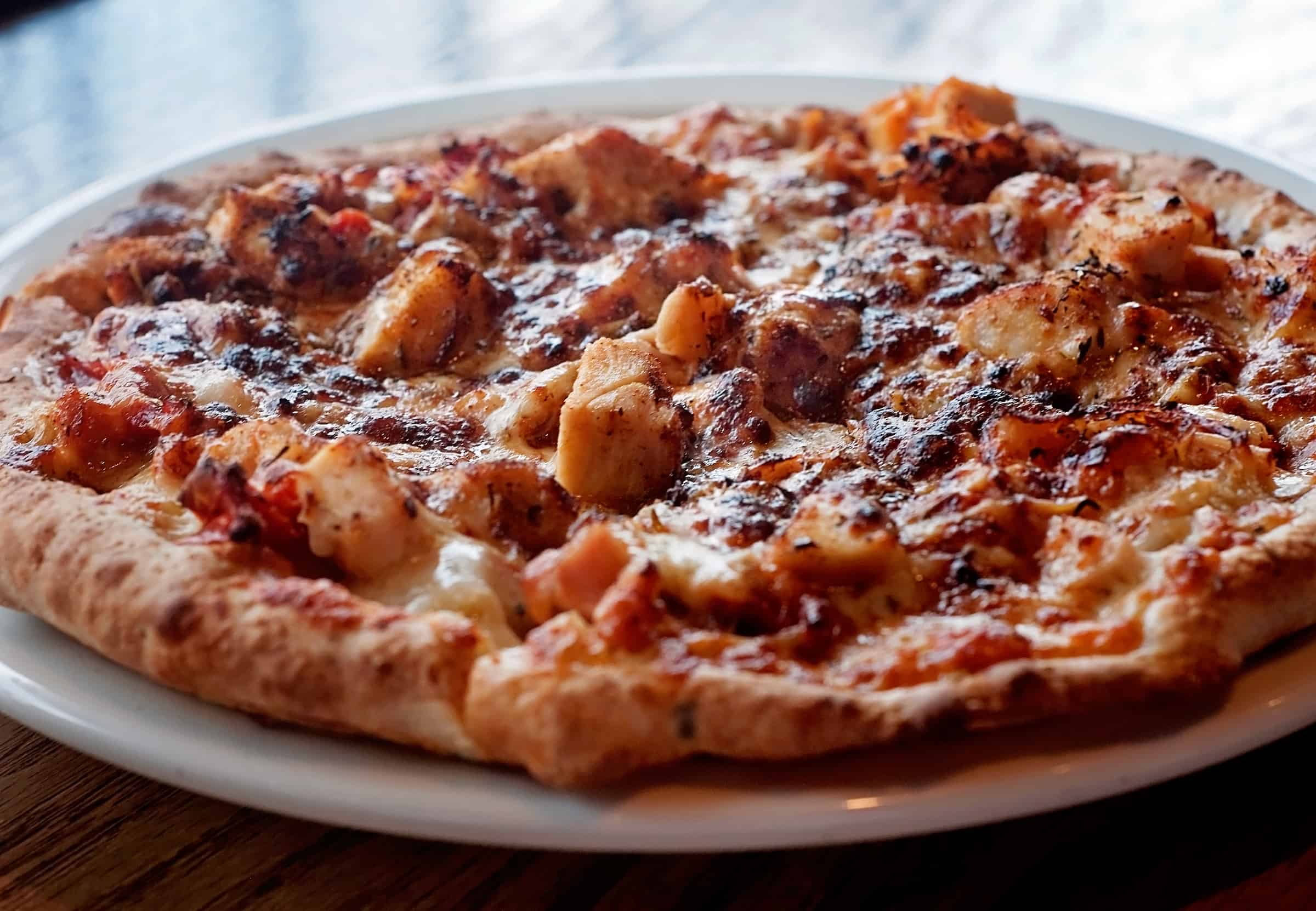 Unwind and reflect at Rowan Oak. Built in 1844, this Greek Revival mansion was Faulkner’s home from 1930 to 1962. Aficionados will want to take a self-guided tour of the home, which has been kept in the simple style Faulkner preferred, but the whole family will enjoy exploring the grounds amid 29 acres of old-growth forest and peace. 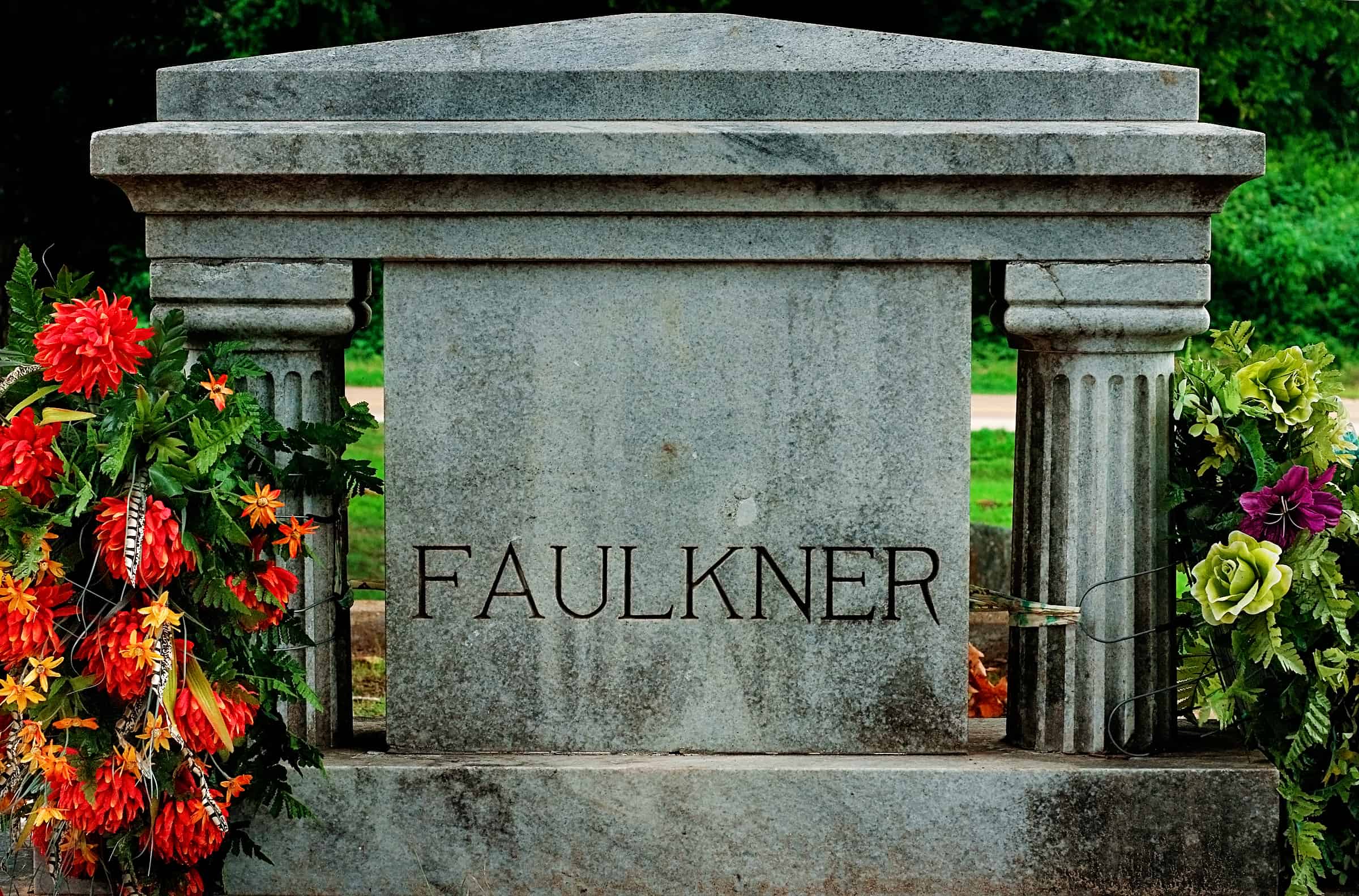 Together, Rowan Oak and Faulkner’s grave in nearby St. Peter’s Cemetery tell a quiet story about the man who wore his fame uneasily and wanted little more than “paper, tobacco, food, and a little whiskey.” Rumor has it students still drink a toast on his grave the night before football games.

Customers wait for a table at Taylor Grocery, July 31, 2011, in Taylor, Mississippi. Taylor Grocery was founded more than a century ago, and the restaurant — famous for its fried catfish — opened in 1977. (Photo by Carmen K. Sisson/Cloudybright)

Finish your visit with a jaunt to Taylor Grocery, which is only open after 5 p.m. Thursday through Sunday. The wait is long, the portions are meager, and the hospitality fluctuates, but the drive is pleasant, the live entertainment is good, and it’s fun to kick back on the porch and chat with locals.

Take pictures of the ramshackle cabin and read the Sharpie-fueled inscriptions patrons have left on every surface, including the rafters. A recent note scrawled on a tablecloth: “Lily Belle Spencer has two teeth 7-16-11.” No doubt, when Miss Spencer learns to write, she’ll leave her own mark on the eclectic restaurant.

As for Oxford, don’t be surprised if it leaves a mark on you. 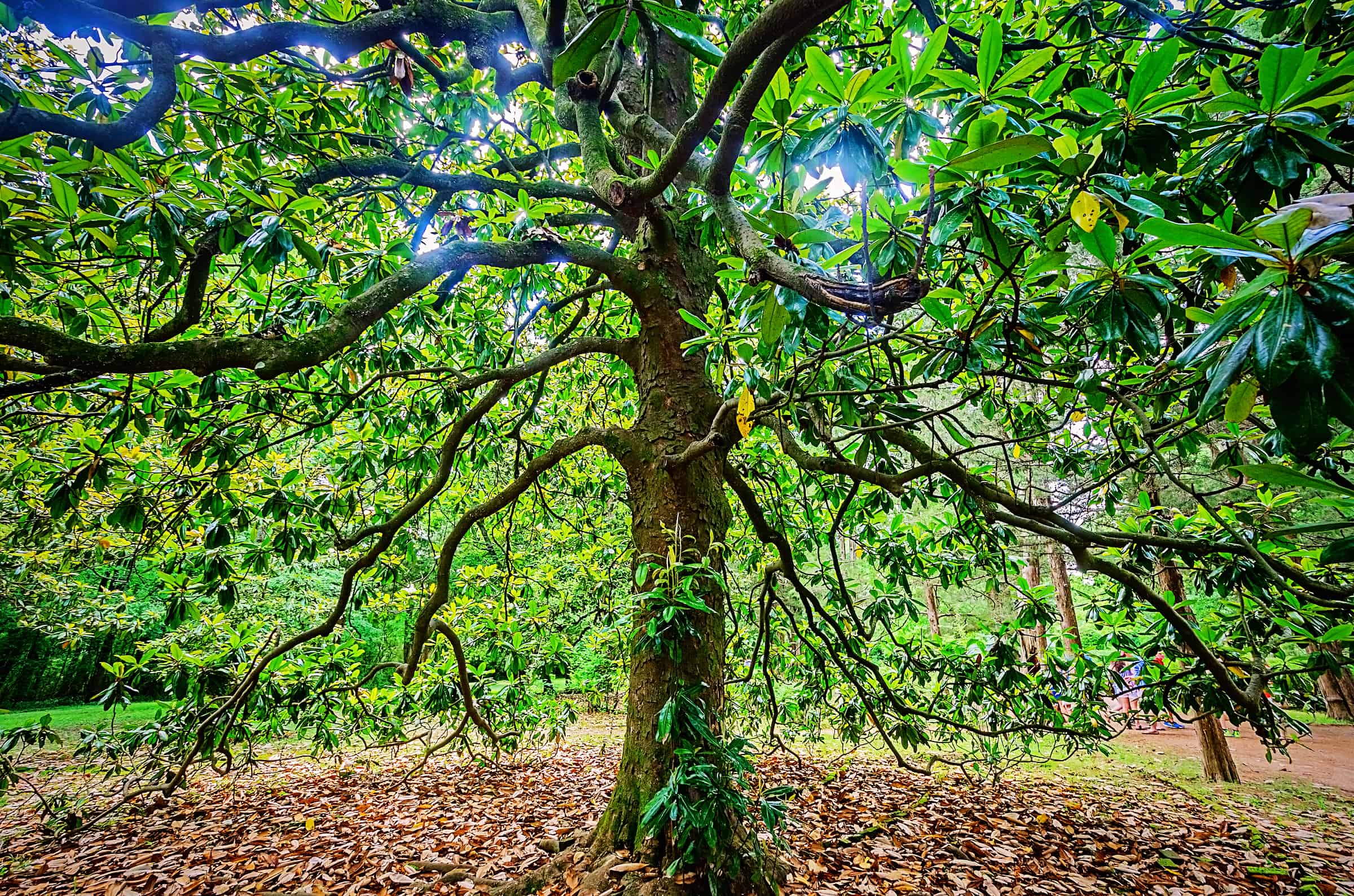 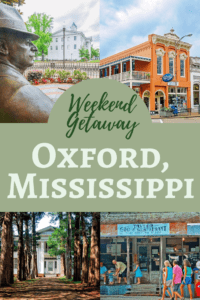