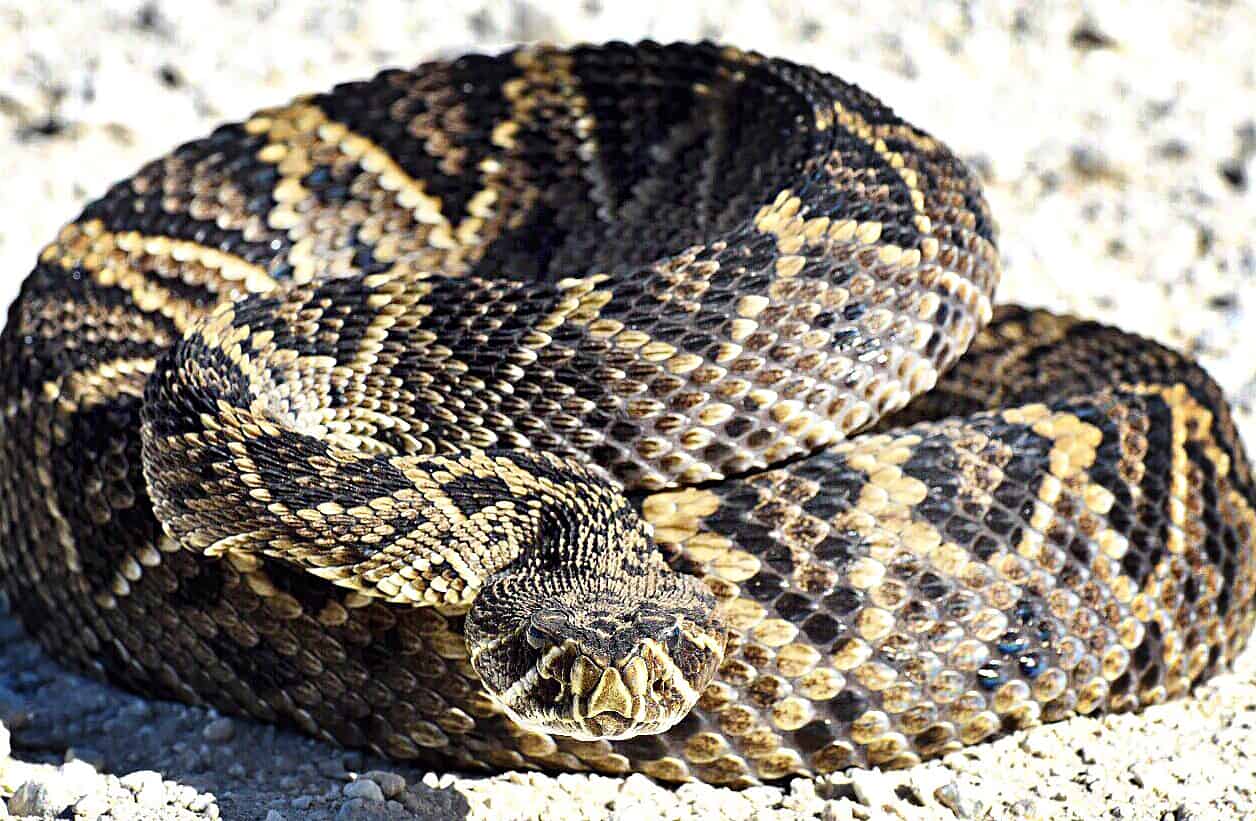 Every region has a few weird festivals, but the South wins the prize for hosting some of the strangest festivals you will ever encounter. (Yes, we’re looking at you, Louisiana and Austin.) Predictably, many Alabama festivals celebrate regional foods and animals, and some, like Mobile’s Mardi Gras, celebrate everything anyone can think of celebrating.

If you’re tired of the standard watermelon-crawfish-blues fests, try these seven uniquely Southern, uniquely Alabama festivals. Whatever your passion, there’s a tribe tailored to you.

We Alabamians love the outdoors, and we love food. At the Opp Rattlesnake Rodeo, you get the best of both worlds — you can enjoy an informative lecture on how to safely handle Eastern Diamondback rattlesnakes, and when you’re finished, you can wander over to the concessions aisle and learn how to cook and eat your snake.

My personal opinion is that this borders on cruelty, and many agree with me, but I’m not keen on snakes, so though I don’t want to kill them, eat them, or watch them die, I’m not likely to shed many tears over their demise. (Minus that one YouTube snake video, but it really was sad — too sad to link out, in fact).

Anyway, cruelty debate aside, many Southerners enjoy catching rattlesnakes and eating them, so here we are.

The rattlesnake rodeo began in 1960 and takes place rain or shine, barring a severe weather event. In the early years, the Opp Rattlesnake Rodeo rarely garnered more than 500 attendees.

Some of the Alabama festival’s rattlers have weighed in at 10-11 pounds, monstrous given the average Eastern Diamondback weighs approximately five pounds, making it the largest venomous snake in North America.

One of the festival’s biggest snakes, an 11.75 pounder named “Big Daddy,” was stolen in 1967 during a secret, nighttime snake raid. No word on whether he ended up on someone’s plate.

Yes, turkeys can fly. Sort of. 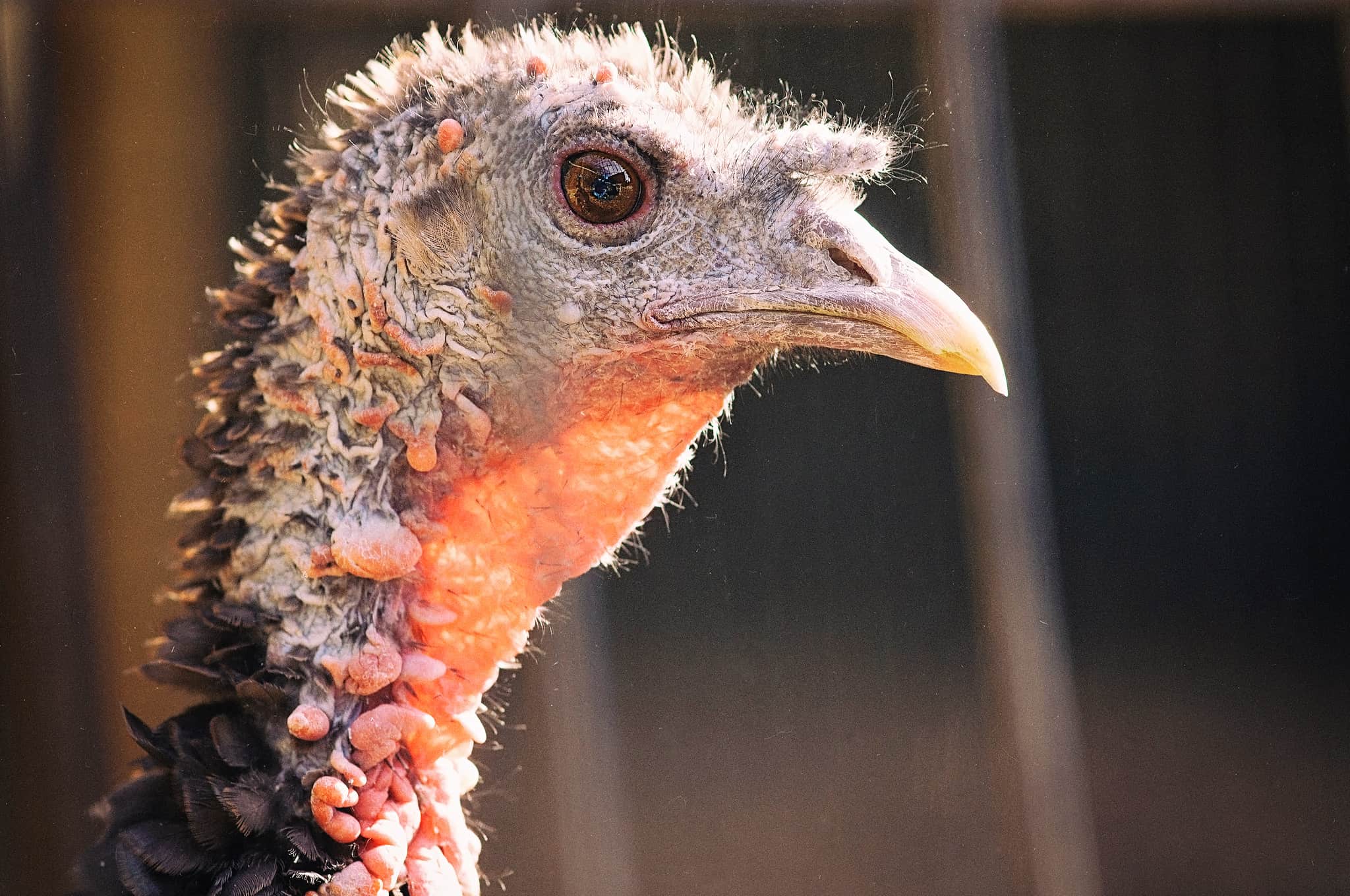 Collinsville, Alabama celebrates wild turkeys such as this one at its annual Collinsville Turkey Trot. (Photo by David Goehring/Flickr available under CC BY 2.0)

Another small Alabama town has its own animal-related festival — the Collinsville Historic Turkey Trot in Collinsville, Alabama.

The highlight of the festival involved forcing the turkeys to walk a 25-foot high, 10-foot long plank, “encouraged” by a man wearing a top hat, cracking a buggy whip, and poking them with sticks.

Contrary to popular belief, wild turkeys can fly, but most domestic turkeys are too fat to do so. When the Collinsville turkeys fell to the ground, families bagged them and took them home for their Thanksgiving feast. Some of the turkeys had dollar bills strapped to their legs, adding to the competitive value of the event.

Mercifully, the turkey trot has been replaced by a rooftop “turkey toss,” during which toy Beanie Baby turkeys are thrown from the rooftops to eager children below.

Labor Day goes to the dogs

Every Labor Day, Alabama’s Coon Dog Cemetery celebrates the lives of working dogs like this one, who was apparently “one of the best.” Once an obscure event, it is now one of the most popular Alabama festivals. (Photo by Terri/Flickr available under CC BY 2.0)

But if domestic animals are more your style, you might enjoy Alabama’s Coon Dog Celebration, held annually in Tuscumbia, Alabama on Labor Day. The event takes place at the Key Underwood Coon Dog Memorial Graveyard (colloquially known as the Coon Dog Cemetery), where more than 185 beloved coon dogs are laid to rest.

Only full-blooded coon dogs are allowed to be buried in the cemetery, and owners must have a witness declare the dead was, indeed, a genuine coon dog. In addition, a member of the graveyard staff must be allowed to view the body and authenticate it.

The Labor Day event is a celebration though, so of course it includes music, dancing, and a liar’s contest. Memorabilia is sold there also, from camouflage hats to coffee mugs.

If it holds still long enough, it’s going to get fried 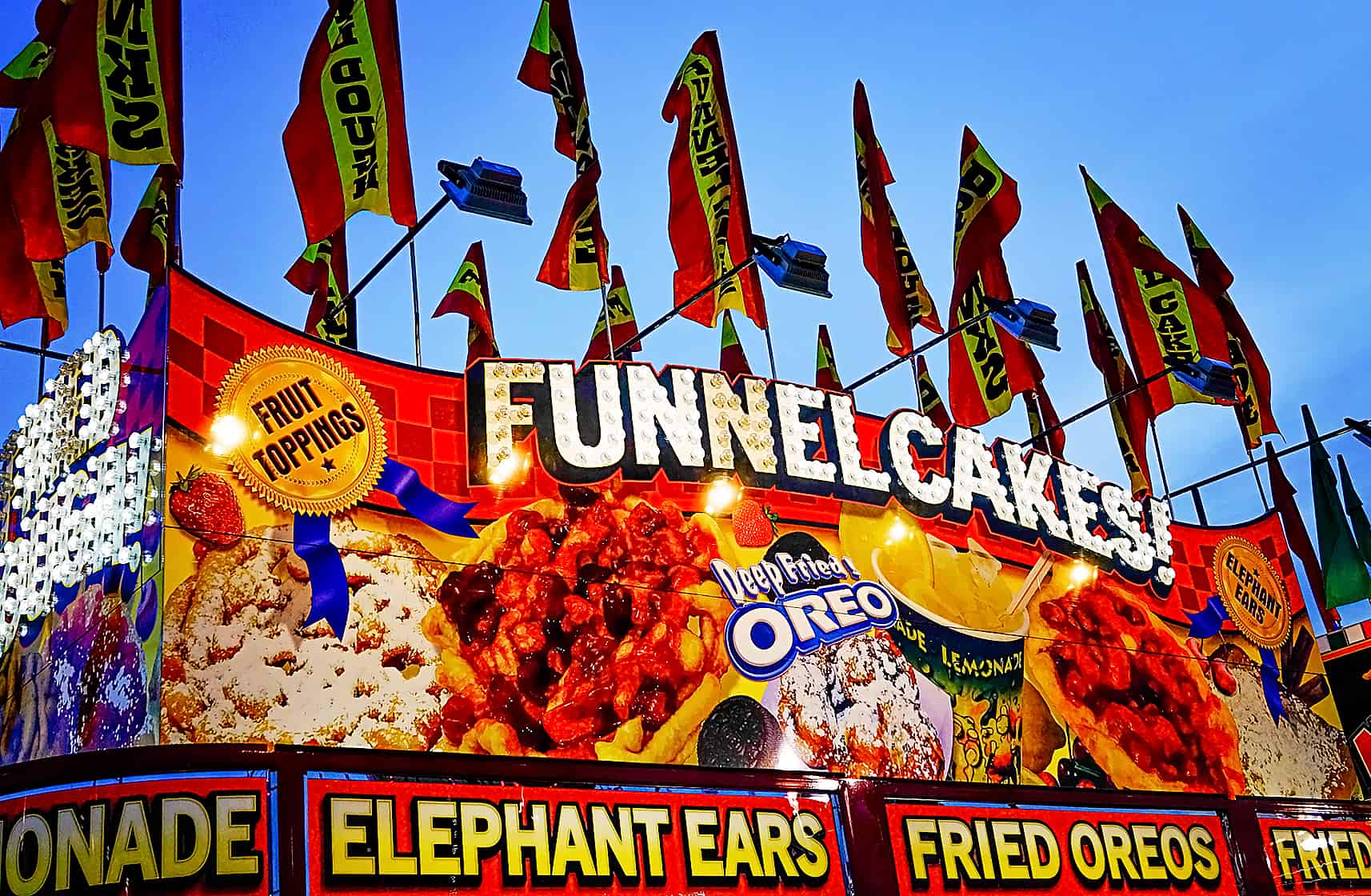 Alabama festivals are known for their fattening, greasy concoctions, but Athens, Alabama isn’t ashamed to admit it. The Athens Grease Festival is a celebration of all things fried, from fried Twinkies to fried okra.

Attendees are encouraged to grab a bedsheet and fashion a toga for themselves, which I suppose is handy when you’re ready to succumb to your greasy food coma.

If the food is less than healthy though, you can always excuse your oily gluttony by saying you spent the weekend contributing to the downtown Athens restoration revitalization program, because in a way, you did. All proceeds benefit Spirit of Athens, a local non-profit dedicated to city improvement projects.

Poking around with poison 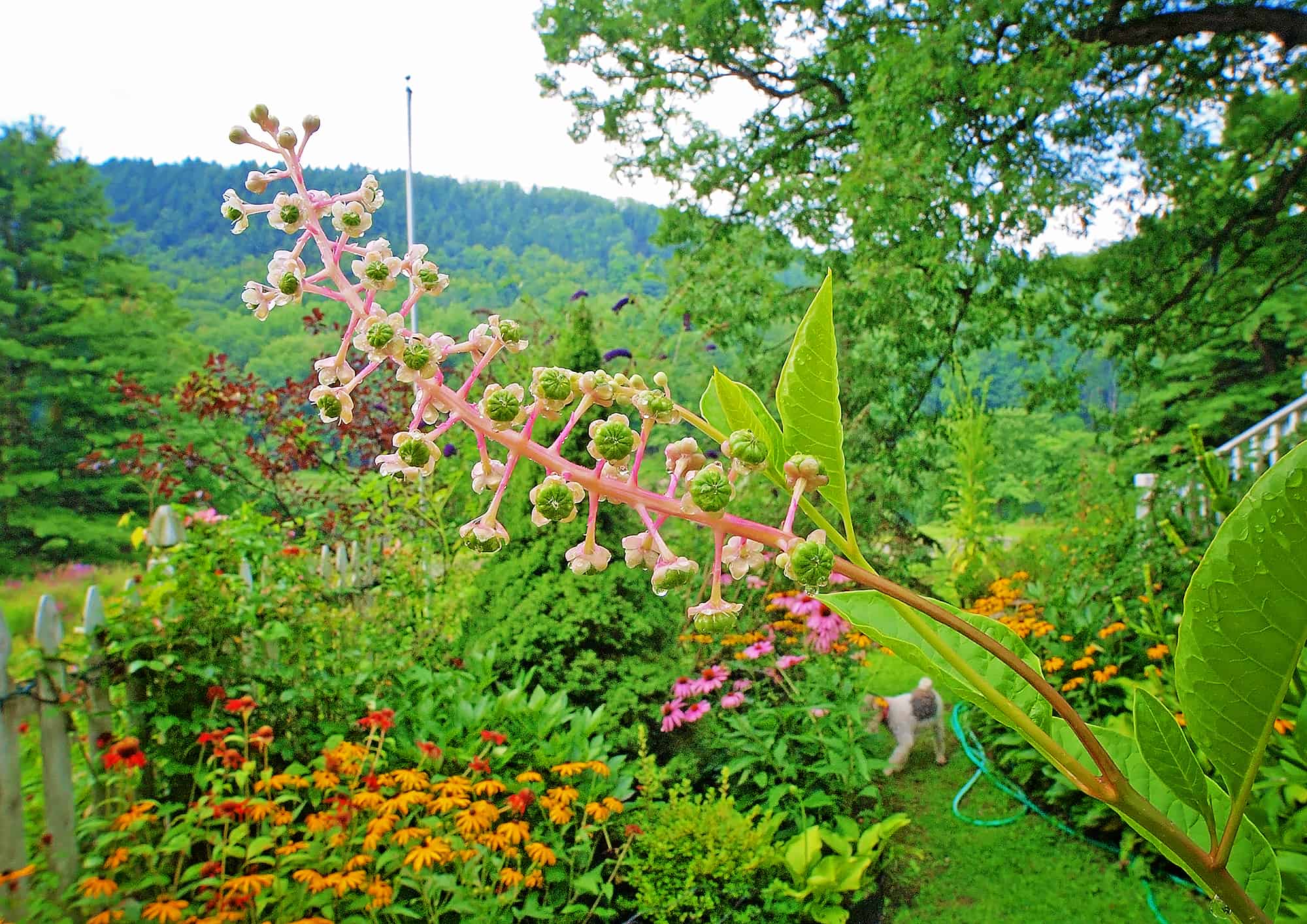 You can redeem your unhealthy ways by attending the Poke Salat Festival in Arab, Alabama.

You’ll see the ditch delicacy spelled numerous ways, from “Polk Salad” to “Poke Salad,” but both of these are incorrect. Likewise, much of what people know (or think they know) about Poke Salat is either unconfirmed or straight up false.

Poke Salat gets its name from the ubiquitous pokeweed which grows wild throughout the South. It has a reputation for being toxic, but pokeweed fans, many who grow their own pokeweed, claim only the mature plants, which bear a purple coloration, are dangerous. The berries are poisonous even while green, so avoid those and leave them for the birds, who are oblivious to its toxins.

Some old timers believe pokeweed eases arthritis, skin diseases, and rheumatism, so they crush it to make wine, jelly, or a pokeweed tincture. Others prefer to eat it as they would any other green — parboiled, drained, and fried in butter or bacon drippings. But most doctors say the weed has no positive health benefits.

Immature pokeweed allegedly contains no poisons, but it still doesn’t hurt to leave your poke salat cravings in the hands of professionals, and be especially careful with it around children and animals.

But enough with the warnings — what about the Poke Salat Festival? Well, if you want to taste pokeweed, you won’t have as many options as you would expect. Only a few vendors sell it. But you can still participate in the other events, which include a pet parade, mechanical bull riding, and local craft demonstrations of everything from basket weaving to pottery making and beekeeping.

The festival began in 1984 when a group of men who called themselves the Liars’ Club, came up with the idea at nearby L’Rancho Cafe. You can still order a side dish of poke salat there. 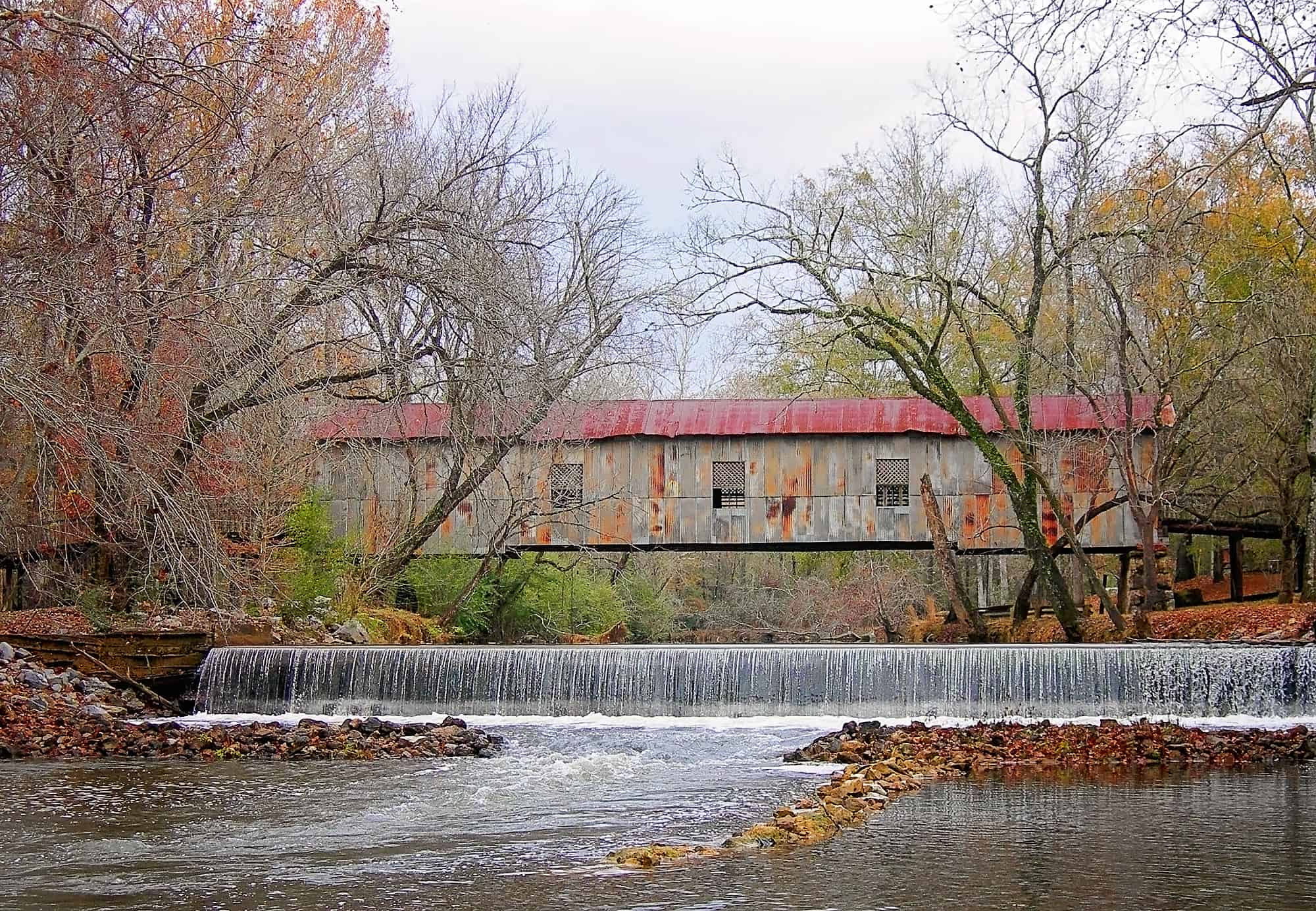 The Kymulga covered bridge leads to the Kymulga Grist Mill in Childersburg, Alabama, where the annual Kymulga Grits Festival is held. (Photo by Jimmy Emerson DVM/Flickr available by CC BY-NC-ND 2.0)

But what if pokeweed isn’t on your culinary bucket list? Well, you could always attend the Kymulga Grits Festival in Childersburg, Alabama.

The festival is named for the nearby Kymulga Grist Mill, listed on the National Register of Historic Places, and the Kymulga covered bridge.

Festival vendors offer a number of grits dishes, from shrimp and grits to grits and cornbread.

If you want to work off the calories, you can participate in the cricket-catching contest or stroll around the various booths, shopping and watching local artisans make various items. Actors also give a performance demonstrating early pioneer life. 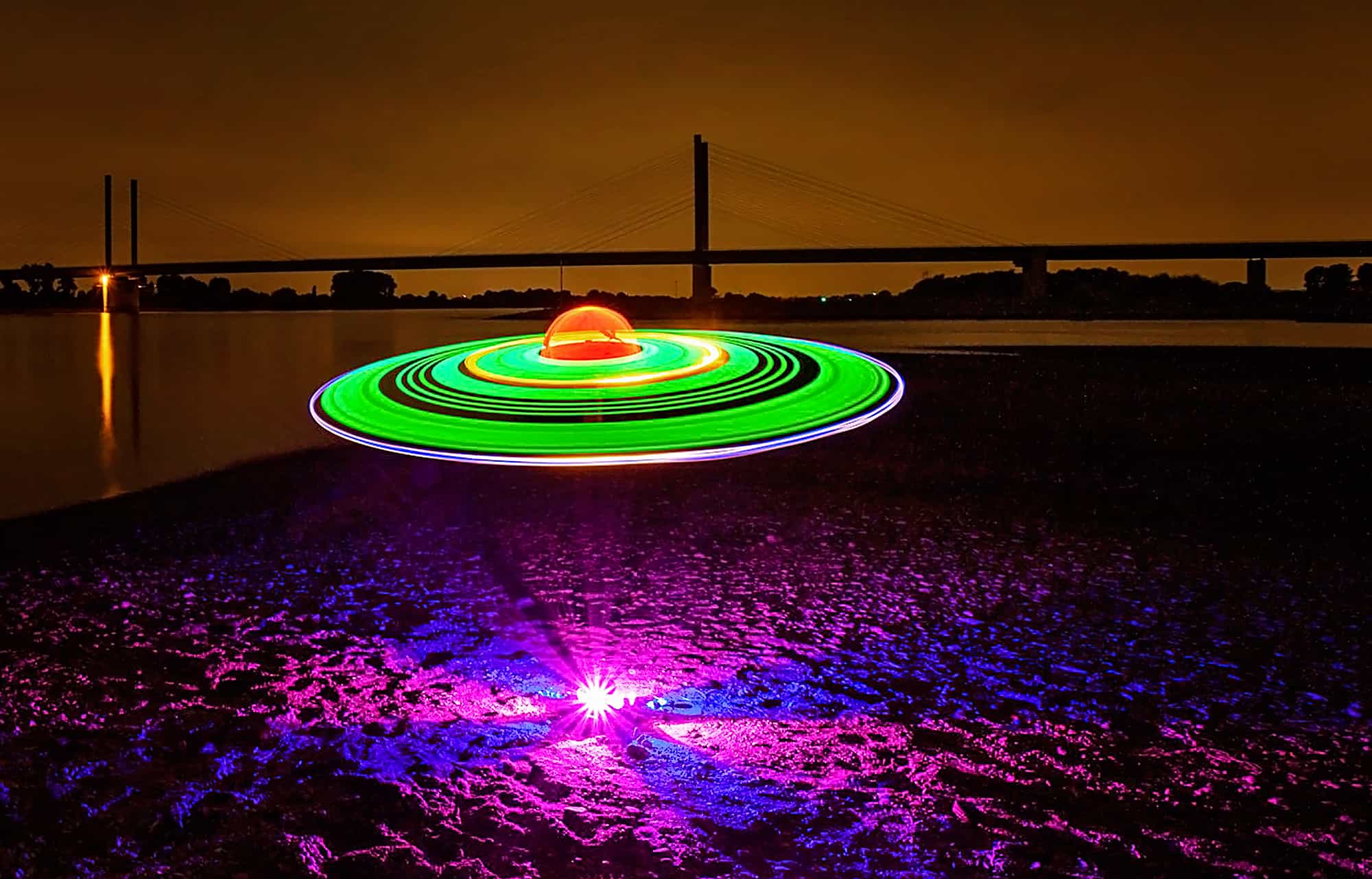 This is not the Fyffe UFO, which is remembered at one of the oddest Alabama festivals. (Photo by Maarten Takens/Flickr used under CC BY SA 2.0)

But Fyffe, Alabama holds the record for having the most unique of the Alabama festivals.

Fyffe UFO Day unofficially began in 1989, when thousands flocked to the tiny town after more than 50 people (including Fyffe’s police chief, the assistant police chief, and several other law enforcement officials) claimed to have seen a lighted, triangular-shaped object in the sky.

Though the townspeople quickly lost interest in the subject, it was revived by savvy marketers who realized it was a good way to promote tourism, but instead of UFO standing for “unidentified flying object,” it now serves as the abbreviation for a decidedly clunky name: (Unforgettable Family Outing) Day.

This year marks the 15th anniversary of the event, which disappointingly does not include UFO rides or complimentary probings but does offer hot air balloon trips.

So there you have it, seven very strange Alabama festivals. Have you attended any of these? Did I leave anyone out? Let me know in the comments.

And if you’re in Louisiana in the fourth week of June, check out this article about the Louisiana Peach Festival.

Children 6 and under admitted free. No pets or alcohol are allowed.

Admission and parking are free.

Admission is $5 for adults, $4 for ages 3-12, and children two and under are admitted free. Save $1 on admission by wearing a homemade toga. 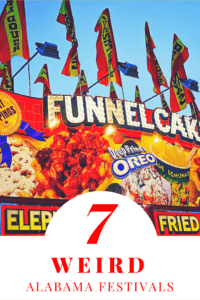