If I had known about the panther, I might have reconsidered.

It’s late afternoon, and the sun is already dropping low behind the tree line when I arrive in French Camp, Mississippi. A chill northerly wind rustles the leaves, and I pull my coat closer, comparing the map in my hand to the scene before me.

I feel like I’ve stumbled into another dimension, the disconnect further enhanced by the past hour I’ve spent driving the Natchez Trace Parkway without so much as a billboard or a red light to remind me of the modern-day world.

But this hodgepodge of log cabins, barns, and out-buildings is not the end of civilization — it’s the beginning.

For the first time in my life (and hopefully the last, truth be told), I wish I had a coon-tail cap and deerskin boots. It’s that rustic out here.

A twig snaps behind me and I wheel around, half-expecting to find myself face to face with a bear. A pudgy yellow dog — a mixture of what appears to be Chow Chow and Labrador Retriever — gazes up at me with hopeful brown eyes.

Looks like my frontier skills won’t be put to the test after all, not this time anyway. 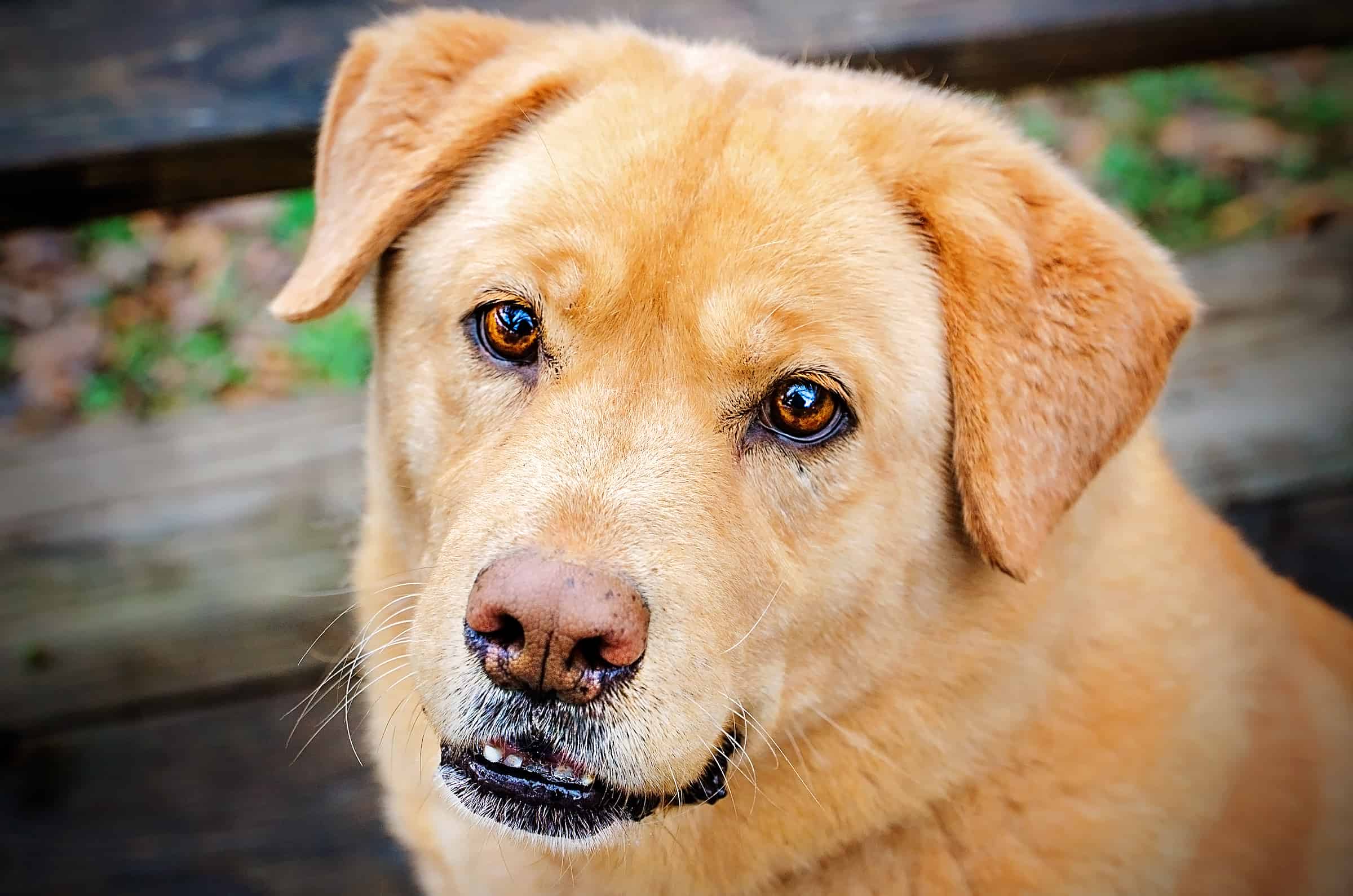 The food at French Camp’s Council House Café draws visitors from around the region, including local dogs that show up at meal time, hoping for a handout. (Photo by Carmen K. Sisson/TumbleweedSOUTH)

To understand French Camp, you must let your mind wander back to the first settlers — the Choctaw Indians. You must imagine a time when bison roamed the American grasslands and the natives followed, living and dying by the land. You must imagine the early Europeans who traveled these backroads, seeking trade with the Indians and looking to conquer this wild, untamed territory. You just imagine an era of bandits and highwaymen and the preachers who made the circuit, trying to bring religion to the settlers of the region.

You must walk into French Camp not with the eyes of a seasoned traveler but with the curiosity of an explorer, looking not to the brochures but to the landscape itself for clues to its riches.

The old Natchez Trace extends approximately 444 miles, from Natchez to Nashville, and the route is loosely followed by the Natchez Trace Parkway, which is maintained by the National Park Service and is divided into mile-markers.

The Natchez Trace has become popular with bikers, hikers, and weekend drivers, many of whom have chronicled their adventures for others to follow in their footsteps and learn more about the history of the Natchez Trace.

French Camp is located at mile-marker 181, about 40 miles southwest of Starkville, Mississippi.

The town was established as a trading post in 1810 by French-Canadian fur trader Louis LeFleur, and it quickly became known as “Frenchman’s Camp.”

Before long, white settlers had infiltrated the area and made it their home. LeFleur married a Choctaw princess, and together they had a son, Greenwood Leflore.

And slowly, the wild land gave way to a peaceful community.

Today, that heritage remains vibrant, with the academy — a Christian boarding school serving approximately 178 students — at the heart of it all. 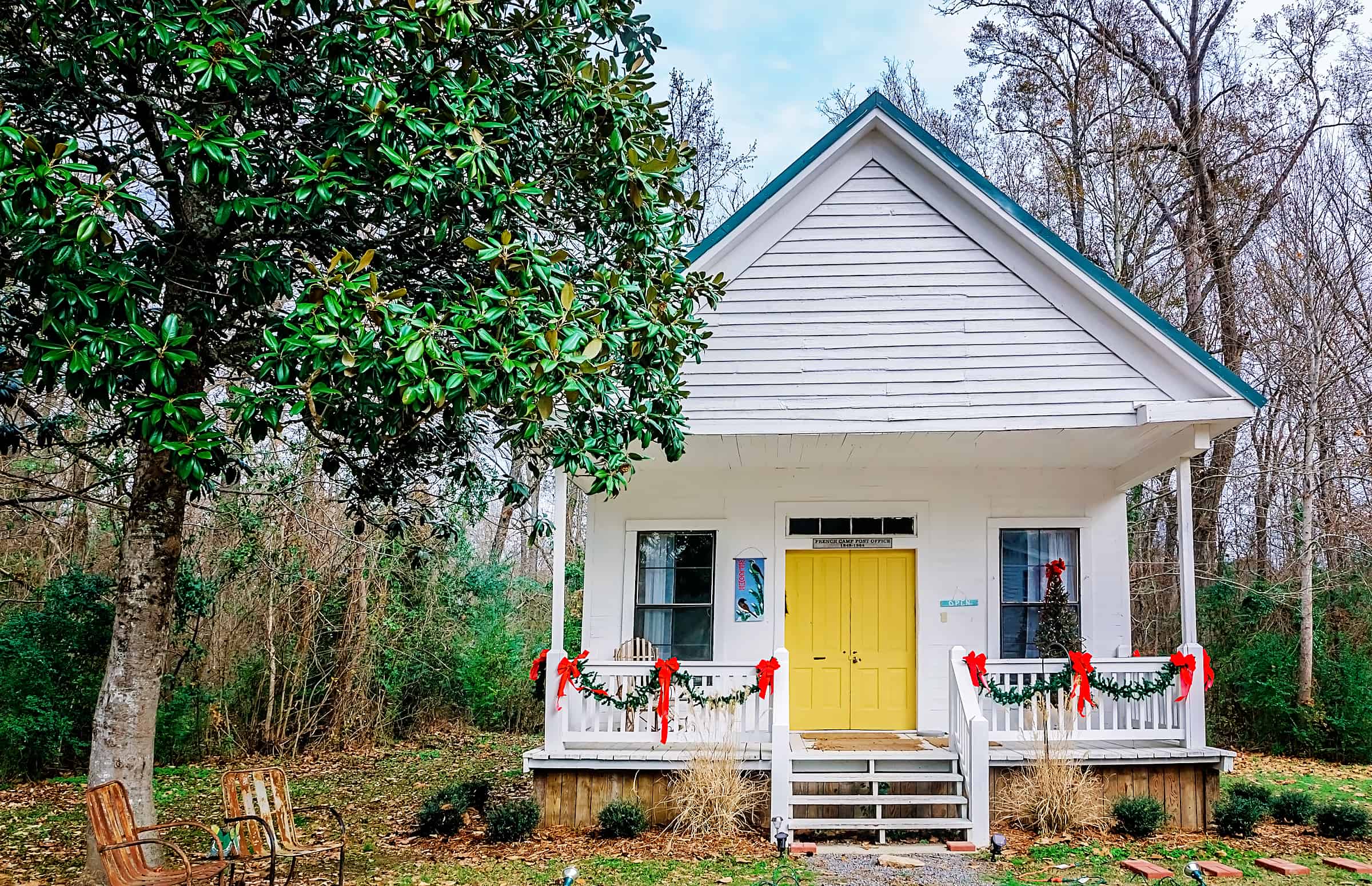 The Children of God Pottery Studio is housed in the former French Camp post office. (Photo by Carmen K. Sisson/TumbleweedSOUTH)

The past preserved at French Camp

Although tours of the 1,000-acre campus are welcome with prior permission, I decide to spend my afternoon exploring the historic village instead.

It’s hard to shake the feeling that I’m trespassing.

There are few parking lots or signs, just a winding gravel road and a boardwalk that meanders unobtrusively between early 19th century cabins and barns. I’m perplexed to find many of the doors locked, and this only adds to my wariness.

When I finally stumble into the Visitor Center, hospitality hostess Deborah Collier puts my mind at ease.

The low-key intimacy is intentional. Here, visitors can relax and unwind, enjoying a taste of the past without feeling as if they must rush from one destination to another. Indeed, there is no destination, per se.

It is more of a slow reveal, with each primitive structure adding another layer of knowledge to the mystery of French Camp.

Fewer than 400 people live here, and most either grew up here or married someone who did. That was the case with Collier, a native of West Point, Mississippi.

Her husband spent summers here in French Camp with his grandparents, and when he brought his new bride for a visit, she decided to make it forever.

Against the backdrop of a cozy fireplace and a floor to ceiling inventory of locally-made products, Collier talks of her love for this peaceful place.

“There’s just something about French Camp that makes you want to be here,” she says. “It’s instilled in your heart.”

She tells me of the annual French Camp Harvest Festival, which has been held on the second Saturday in October for more than 60 years. She tells me how people gather from communities all around to watch French Camp’s famous sorghum molasses being made, and before long, I’m sure I can smell the wood smoke and hear the sweet liquid boiling. 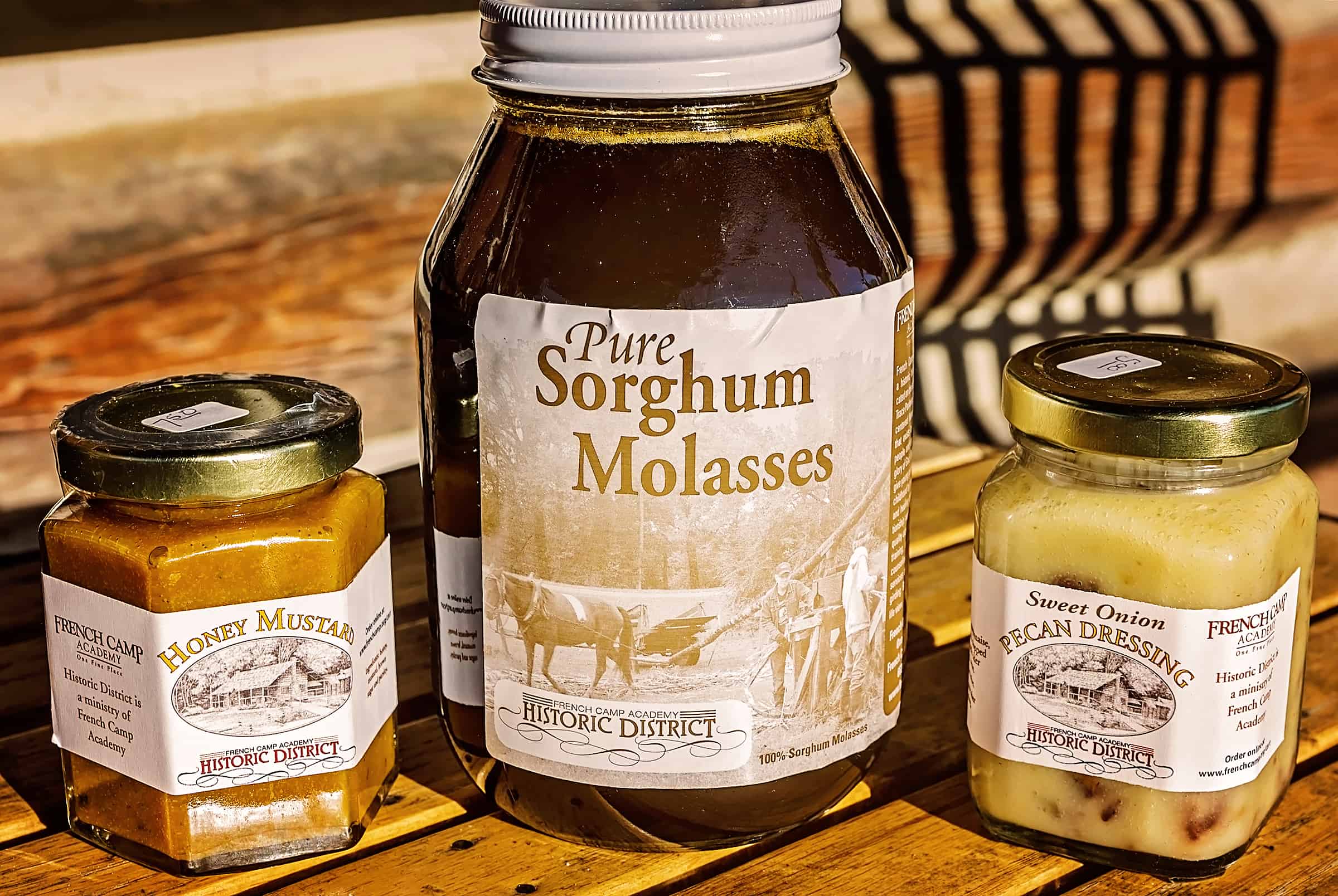 She tells me about the annual Pioneer Day, held in late spring, and how the craftsmen gather on the lawn, pounding out horseshoes, caning chairs, making quilts, plying their trades.

She tells me about Second Friday, a monthly event, and how people crowd into the Council House Café for a steak supper then head to a free program at Rainwater Observatory and Planetarium, home to 24 high-powered telescopes designed to foster an appreciation for the splendor of the heavens. She tells me about the students who come from around the world to attend this quiet little school, and she tries to tell me how people return to French Camp again and again, not because of what they find outside but because of what they discover inside themselves.

“You feel a sense of peace when you come here,” she says, “You can’t really explain it, but you feel it.”

Wandering the grounds of French Camp 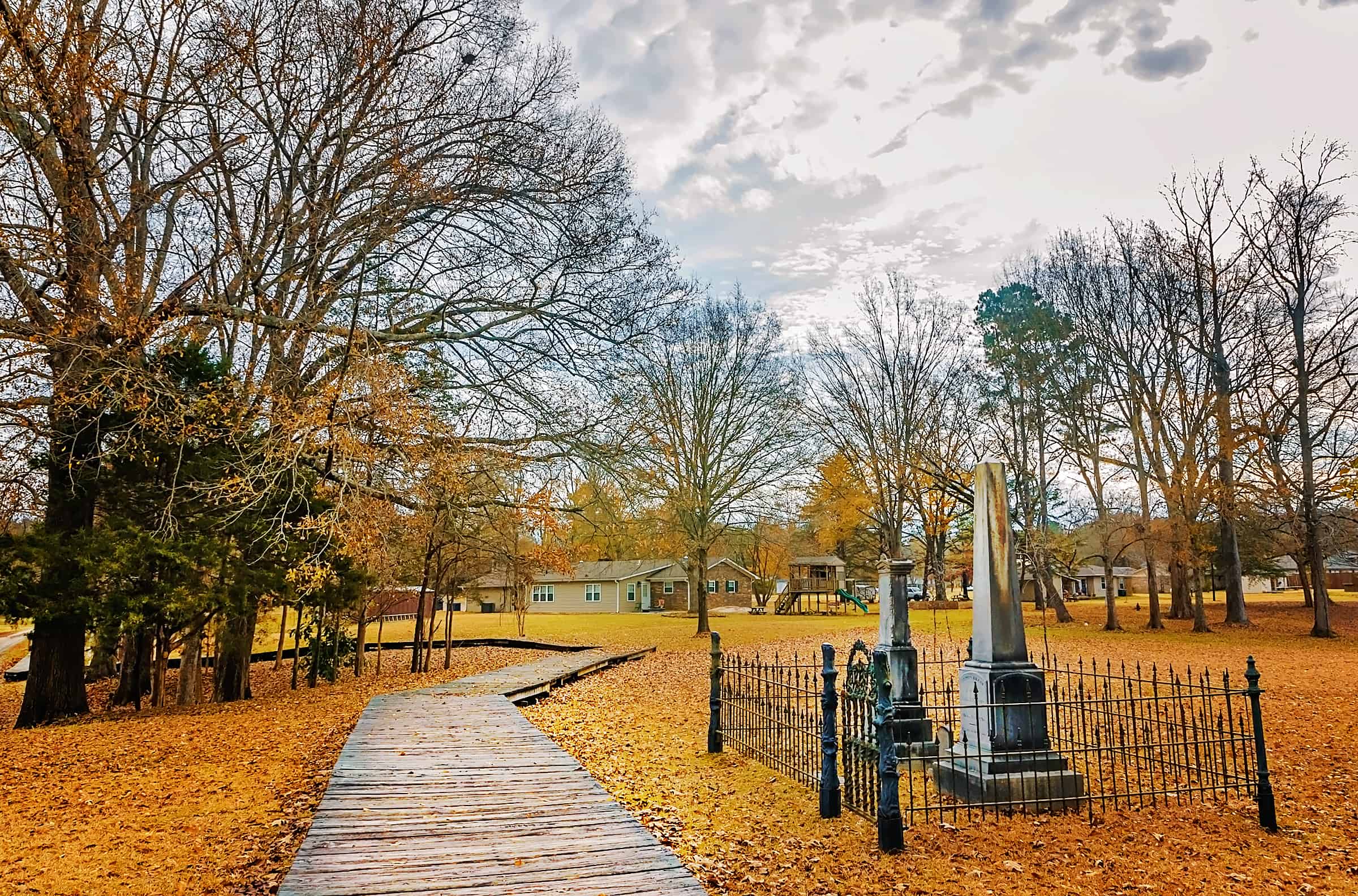 A boardwalk winds through French Camp’s historic district, inviting visitors to take a self-guided tour of the grounds. (Photo by Carmen K. Sisson/TumbleweedSOUTH) 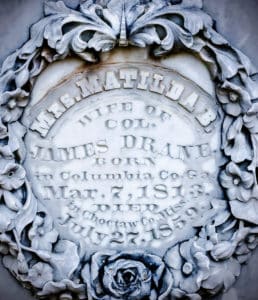 The headstone of Col. James Drane and his wife, Matilda, was moved to French Camp in 1991. (Photo by Carmen K. Sisson/Cloudybright)

If there is a downside, it is this: Many of the buildings remain closed except during special events.

I’m disappointed to find padlocks on the doors of the Drane House, a circa 1845 antebellum home that was dismantled board by board by French Camp Academy’s staff and students, then painstakingly pieced back together and restored to period.

Drane moved to Choctaw County in 1838, when he was 28, and is one of the most distinguished settlers of the area. He served as a state representative, senator, and president of the Mississippi State Senate. His headstone, along with that of his first wife, Matilda, was moved to French Camp but they are actually buried near the original homestead. He is remembered in his Clarion-Ledger obituary as being of “elevated character, inflexible will, integrity of purpose, and clear intellect.”

The home, which is listed on the National Register of Historic Places, was constructed with a water saw and features wooden pegs and square nails.

Since the Drane House is closed, I head over to the Alumni Museum, but it is locked as well. For today, at least, I will not get to see the antique farming tools, vintage clothing, and other memorabilia.

Most of the buildings on the grounds are not intended for walk-throughs, explains guest services director Summer Poche. You can call in advance to schedule a tour, and if you’re lucky you can catch volunteers at the museum or pottery studio, but mostly people just wander through, eating at the café, shopping in the gift shop or thrift store, and enjoying the atmosphere. 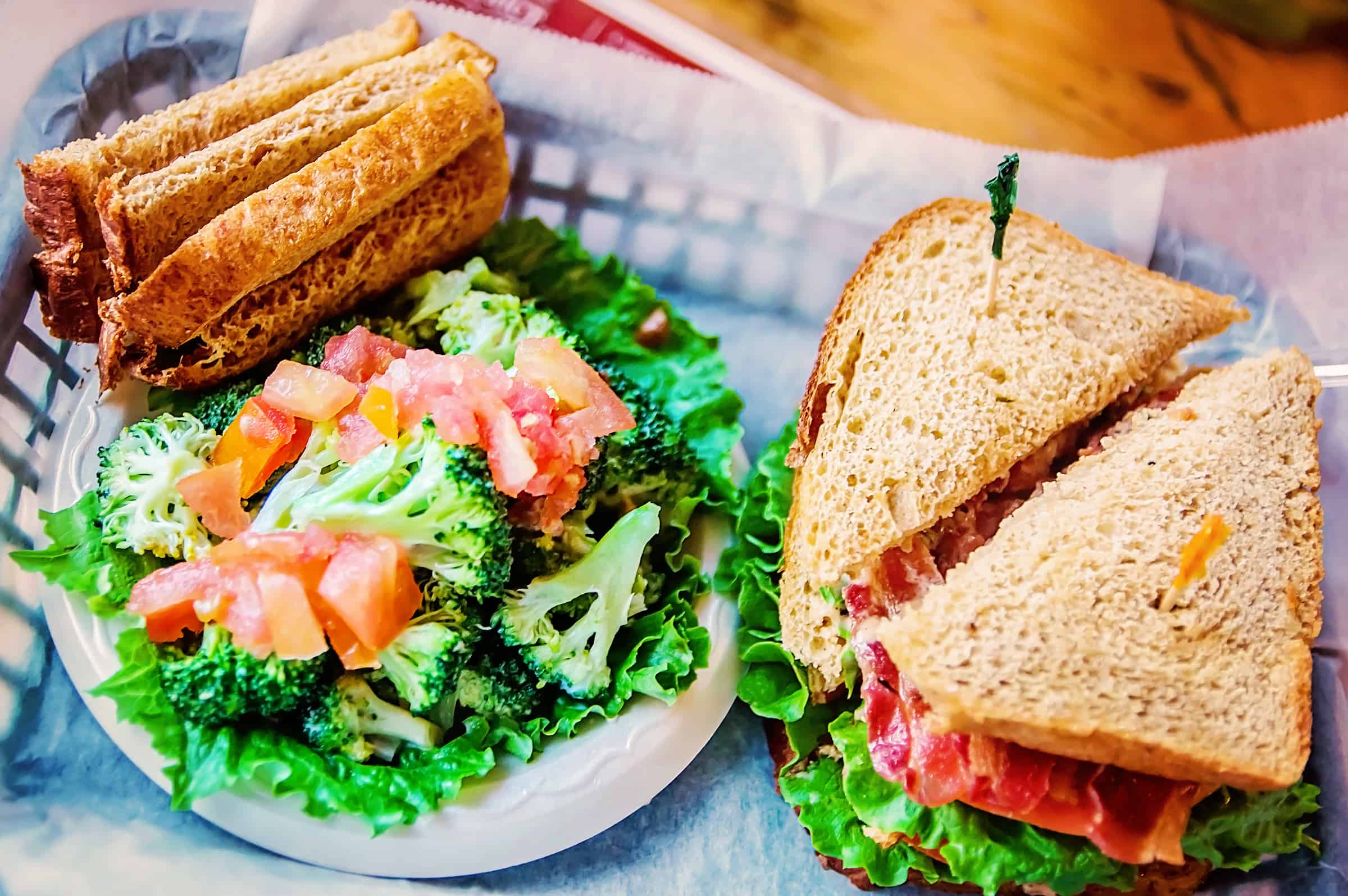 By this point, I’m more than a little hungry, so I follow the yellow dog — which I later learn is named Zoey — past the gift shop to the Council House Café.

And this is where I fall in love. Hard.

Since the day is gray and dreary, I bypass the patio and pull up a chair hearthside, determined to sample everything on the short menu.

But “Big Willie” makes me forget everything I’ve ever eaten. It’s not the fresh tomatoes or the 10 artery-clogging strips of bacon or even the garlic mayonnaise that puts this BLT over the top. It’s the bread — three slices of sorghum wheat so dense and rich that it makes this two-inch behemoth of a sandwich seem simultaneously decadent and nutritious. (Don’t ask me how many calories are in this beast. I really don’t want to know.)

As I eat, Sims tells me about growing up in French Camp. She can remember two grocery stores. Two gas stations. The names of every member of her graduating class. This past year, French Camp Academy’s football team overcame a string of injuries to capture the first 1A championship in the history of the school.

Then Sims tells me about the panther.

Between Big Willie’s extravagance, the warmth of the fire, and the gathering dusk, I’m a ripe target for a good Natchez Trace ghost story.

And that’s how I ended up wandering around French Camp by moonlight, hoping to see a white panther.

Sometimes, when the moon is full, that white panther can still be seen sprawled across the grave of its mistress, somewhere around the 50-yard line of the French Camp Academy Panthers’ football field.

Sims delivers this story with such a straight face that I’m not sure if she’s presenting it as fact or fiction.

But later, as I sit in my car and watch the moon rise over the hills, I realize that whether or not the panther is real, French Camp still weaves an undeniable spell. And I have a feeling I’ll be coming back.

Things to do in French Camp, Mississippi

The Big Willie BLT, served during regular hours, is $8.50.

Steak night is held on the second Friday of every month, from 5-7 p.m. The meal costs $14.99 and includes a 10-12-ounce, hand-cut strip steak, loaded baked potato, salad, and homemade bread.

Admission is free on the second Friday of every month.

Watch French Camp’s famous sorghum molasses being made on the first three Saturdays of October. Jars are sold in the gift shop or at French Camp’s online store. 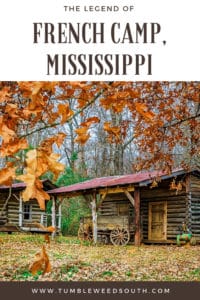