TSA has its detractors, and with just cause. No one enjoys the pat-downs and body scans, and the conveyor belt X-ray adds to travelers’ frustrations. Bob Burns is trying to change all that with a dash of humor and a side dish of snark.

Burns, the TSA public affairs specialist and social media analyst, joined the agency in 2002. Originally he was stationed at Cincinnati-Northern Kentucky International Airport (CVG), but he currently works at the headquarters in Virginia.

The “voice” of the TSA

Though others work in the TSA public affairs department, Burns is known as the “voice” of the TSA, churning out numerous blog posts, tweets, and Instagram photos daily. The goal, he says, is to put a human face on what could easily be dry government jargon.

Earlier this month, his efforts were rewarded when TSA received two Webby awards and a People’s Voice award from the International Academy of Digital Arts and Sciences, which spotlights the best Internet sites.

Photos of confiscated items are the most viral posts, offering a steady stream of firearms, along with stranger items like the spiked tube Burns calls “the paint roller of death.”

The TSA blog is a joke

The TSA blog serves up a steady supply of information and jokes, especially during the holiday season.

What should go in your carry-on baggage?

What should be in your checked baggage?

•Cranberry sauce, “whether it’s homemade (booyah!) or straight from the superb aluminum can”
•Snow globes, as TSA is “not in cahoots with the Heat Miser” and is “not in the business of busting snow globes”
• Wine, as in “check yo’ bottles in yo’ checked bags”

Light sabers are allowed in both carry-on and checked baggage.

“Sadly, the technology doesn’t currently exist to create a real lightsaber. However, you can pack a toy lightsaber in your carry-on or checked bag. May the force be with you.”

Your Harry Potter wand can be carried on the plane or checked, but the verdict is still out on whether you can render TSA boggarts riddikulus or summon your patronus. As for casting wingardium leviosa, well, that would just be redundant, wouldn’t it?

As for your Magic 8 ball, the outlook is not so good for carry-on bags but is certain for checked luggage.

TSA gets the last laugh

There is one final tip which Burns no doubt picked up while serving in Alabama in the U.S. Army: “Powdered mashed potatoes are a crime against humanity but fine to travel with.”

Also, tofu turkey is not real, in case you wondered. ✈ 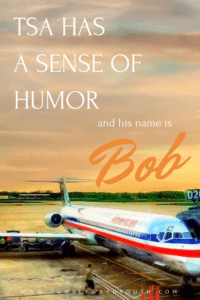